Last week we organized and hosted the first fishing tournament ever (to our knowledge) on Parker Lake. The tournament was held during the few hours between breakfast and dinner. The 1st annual Parker Classic was a single day, two category tournament with prizes for the best four Walleye lengths and best four Northern Pike lengths caught and released per boat. There was no official weigh-in since we were working off the honor system. We also threw in a rock bass bonus although no one was able to take advantage.

Jeff and Andy Zwieg topped the Northern Pike division with 95″ of fish and there was a tie in the Walleye division. Carrie and I tied Team Mercer consisting of my sister Mercer Mack, Matt Dillon, and Heather Cottle-Dillon with 74″ of fish. The big Walleye of the day was the 22″ fish (pictured below) that I caught right off the point from the lodge where we dump the food scraps. Carrie and I fished close so we could also handle some dinner prep duties. 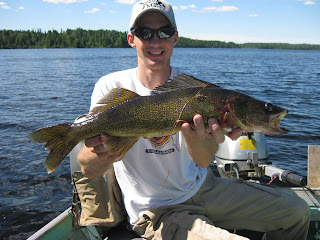 We are still catching plenty of fish on Parker in 6′-12′ of water. The fish on Red Lake are being caught in a variety of depths although some are starting to move deeper. Last week our guests had the best luck in 10′-18′ of water. Forecasts are calling for temps in the upper 80s this week so the fish should continue to move to deeper water.

Until next time, tight lines!