As I mentioned in the previous post, I wanted to share our experience of going to the walleye tournament weigh-in on Saturday a little more in-depth.  Typically, this tournament takes place the weekend we are bringing in our last group for the summer.  Travis and I are usually busy picking up and orienting a full group of guests and can’t really sneak away to partake in any of the tournament festivities, so it was a real treat for us to leisurely go in on a Saturday afternoon and watch. 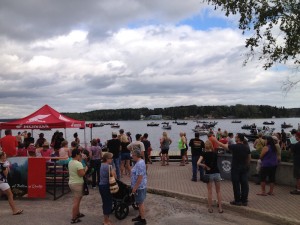 This is such a rarity that when I ran to the grocery store before we headed back to camp one of the employees asked me what I was doing there on a Saturday afternoon.  How pathetic is that?  They know I am on a strict Tuesday and Friday morning shopping routine, and they had to make sure nothing was wrong when they saw me on a Saturday?!  Sheesh, I need to get out more!

For those anxious to know how Phil and Kyle finished out the tournament, you’ll just have to wait.  I do things in chronological order, people.  It makes my brain happy.

Before this Saturday, the whole logistics of how the tournament actually worked was a bit of a mystery to me.  It was really cool to actually witness how everything goes down each day at the weigh-in.  It is a big time operation!  Lets get started, shall we…

First, each team has a specific check-in time, based on which starting wave they were in (1,2, or 3).  You have to be back in Howey Bay and check in with the official tournament boat that is floating out in the water by your scheduled time if you want to weigh your fish.

All fish have to be in a live-well, and are checked by a tournament committee member on the dock before you take them out to be weighed.  They will check to see if any of the fish are stressed, if they have weights on them, etc. 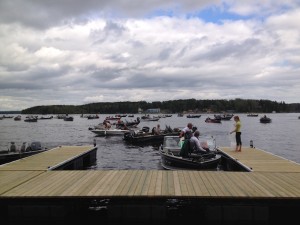 Once you get the all clear, you place the fish in a giant plastic bag full of water and QUICKLY carry them from the dock to the blue water tanks where another committee member will check lengths (if necessary) and get them in a basket for you to take to the weigh master. 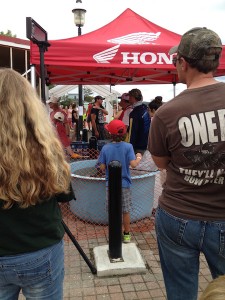 Then, when your boat number is called, you carry the basket up to the weigh master to be weighed.  The fish weight total is displayed on the digital screen, and they have an emcee of sorts announcing all this stuff very dramatically. 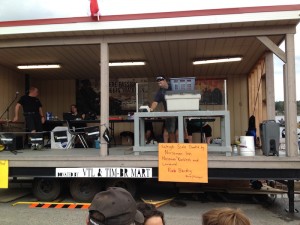 Then, a tournament volunteer takes your basket full of fish and delivers them to a tent behind the weigh master.  In this tent are various water tanks, where they monitor the fish and assess whether any are stressed, etc.  Once fish are deemed recovered, they are released into the water right off the dock. 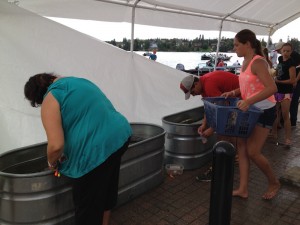 This process was pretty wild to witness.  There are so many fish coming in, so these volunteers where frantically trying to monitor them all and get them back into the water as quickly as possible.  They would use weights to keep them upright in the water if they were stressed.  They were checking the lake temp, and then checking the water tank temp to make sure they matched.  It was tough, because it was a warm day and a lot of these fish had been brought up from deep depths (which means cooler temps) and then are getting released in to 70+ degree surface temps after they were handled several times from live-well to plastic bag to basket to water tank to net. 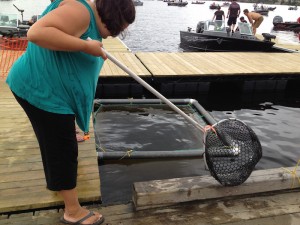 This little girl was my favorite.  Her job was to walk back and forth on the dock where they had just released all the fish and make sure non of them were struggling.  If she saw one that wasn’t swimming away she would yell “Belly- upper!” and another volunteer would run over with a net and scoop it up back into the water tank.  She took her job VERY seriously.  As she should. 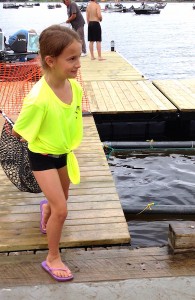 Here are Kyle and Phil looking pretty elated after day one of the tournament.  They are standing in front of the giant standings board that is constantly getting updated as fish are brought up to the weigh master. 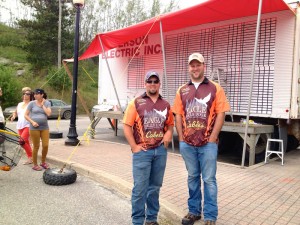 After a rockstar day on Saturday, Kyle and Phil headed into Sunday with some reservations.  They didn’t lack confidence, but they had some realistic concerns about being able to produce such great weight 2 days in a row.  They headed to bed hoping their “big fish” spots hadn’t been used up on day one not knowing what tomorrow would bring.

Sunday was a rough day for them.  The good news is they brought 5 fish to weigh in.  The bad news is, they were all unders and not exactly what they had hoped for.  But, as any angler knows, there can be some mighty humbling days waiting for you out on the water.  This was one such day.  They finished out the tournament in 59th place, still well within the top half of the field.  Nice job guys!  I know they were disappointed, especially after such a strong start on Saturday, but what can you do?  Fish can be fickle, anyone who has spent any amount of time out on the water know that to be an absolute truth.

I’ll share another truth with you…..
Travis and I witnessed hundreds of fish get released right there in Howey Bay this weekend.  BIG FISH.  That bay is stacked with more fish right now than probably any other spot on the entire lake system.  We might be opportunists, but we are TOTALLY going fishing there this afternoon.  Those fish had one heck of a workout this weekend, and are probably a little stressed out.  I know the only thing I want to do after a big workout and stressful day is EAT!  Right?  Sound logic, for sure.  We will let you know how it goes.

Congrats to all the anglers that participated in this year’s tournament.  If you want to peruse final tournament results you can find them here: www.redlakefallclassic.com.