So far we’ve reviewed lindy rigging, jigging, and trolling crankbaits as effective methods to catch more walleye.  Our fourth trick is using a Jigging Rap or Puppet Minnow to catch bigger fish.  Thanks to the Krohns for turning us onto this technique.  They are pros at all aspects of fishing, but particularly deadly with a Jigging Rap. 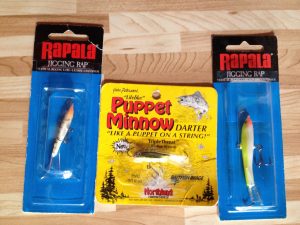 The Jigging Rap is Rapala’s version and the Puppet Minnow is from Northland Tackle.  There are a variety of colors and weights available.  These were originally designed as ice fishing lures so you could vertical jig with a lure right through a hole in the ice.  Someone along the line discovered how effective these lures can be during the summer months too.

Lower the lure to the bottom, but be careful to not let it drop too quickly.  Walleye love to hit these baits as they fall and with slack in the line you won’t be able to feel the bite.  Raise the rod tip up about three feet and let the bait fall again.  The lure runs in a circle and proves to be a tempting target for walleye.  You can control the speed of the lure spinning in a circle by how fast you raise and lower the bait.  You can really rip the rod up and put some speed on the spin.

We have noticed a couple things fishing these lures.  First, they catch loads of fish.  Second, we seem to think these lures trigger bigger fish to bite too.  We can be fishing in an area with jigs or lindy rigs and catching smaller fish.  When we tie on a Jigging Rap in the same area our average catch size usually increases.

Bring a couple of Jigging Raps or Puppet Minnows on your next trip.  We know you’ll have fun trying out any of these four methods of fishing and catch more walleye!