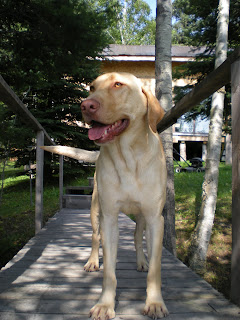 This is Cosmo. He is the biggest, sweetest, most loyal goof you will ever meet. I got Cosmo as a “you are done with school forever” gift for Travis about 3 and half years ago. We got to experience the challenges that accompany a yellow lab puppy while Travis also bought his first home. Needless to say we could create a separate blog about all those trial and errors. Despite Cosmo’s past he quickly became a very important and loved member of our little family. Lucky for him he gets to spend lots of his future doggy days in Canada and had a blast during the 2009 season. Swimming comes naturally for him and he spent much time in Red Lake and Parker Lake as Travis and I learned the ins and outs of lodge ownership last summer.

Travis, Cosmo, and I are getting anxious to head up north to get the the 2010 fishing season started. At Travis’ parent’s house in central Illinois the temperatures have just recently started to feel like spring. A few weeks ago the sun was shining and their pond was just starting to thaw. Cosmo was out patrolling in the back and got called inside. Smart lab that he is he took the shortest route and started to run across the pond to get to the back door. I looked in horror as he fell through the ice into the freezing water. This is where the goof part comes in. Cosmo attempted to swim to shore and made a good run at busting up the ice that stood in his way. I ran outside (in my pajamas) and was standing on shore encouraging him. He was shivering and cold. He was also getting extremely tired. I was FREAKING OUT as the need for a rescue was becoming near. Cosmo’s eyes met mine and he had a panicked look like “Why is this happening, and more importantly why aren’t you doing anything about it?” I did what any stupid person who loves their dog would do….I went after him. I was able to walk out on the pond to where he was struggling and I bent down to pull him onto the ice. Sounds like a reasonable plan, right? Hmmmm, turns out not such a good plan. Soon I was in the frozen icy pond as well. I quickly went under and pushed Cosmo towards shore. He was able to get over the last hunk of ice and swim the rest of the way. I wasn’t far behind him. As we sat on the bank sopping wet my panting was about as bad as Cosmo’s. He smothered me with those famous sloppy lab kisses. I couldn’t believe what I had just attempted, but was extremely thankful it had a happy ending. Cosmo seems to remain grateful and is perfectly fine. He is one lucky pup, but not as lucky as Travis and myself who were blessed with such a perfectly imperfect companion.

Note from author: Cosmo has since enjoyed several early season swims and continues to train for the blissful summer awaiting him in Red Lake, Ontario. Stay tuned for more Eagle Falls Lodge updates.