Question: Do bears eat desert wraps?  The answer my brother, Travis, gave me was, “Probably, but I bet they like sixteen year old girls better.”  Let me explain.

Last night, I began to make my weekly desert wrap.  I put bacon, spinach, and leftover turkey on a flour tortilla.  This delicious meal was accurately named by Travis, as I do not put any kind of dressing, sauce, or cheese on it.  I had just expertly wrapped my tortilla when a guest ran by the kitchen and said, “Hey Mercer! There’s a bear out by Parker.”  I turned to see multiple guests line up at the window.  I let Travis know about it before I walked outside to take a look at the bear myself.  It was small, but it was heading right for the fish house.  Travis came around the corner and lit a Roman candle.  He scared the bear back into the woods, and I followed the both of them.  I started to stomp out the burning coals from the candle, just as a precaution.  Travis walked up to me right as I had finished stamping the last of the coals.  “Crisis averted,” I declared proudly.  Just then, we heard a stick break.  Close. . .too close.  We both looked towards the noise, and not ten yards away the small bear had shimmied up a tree.  Before I got a chance to even look at it, Travis was bolting out of the woods.  Basically, Travis had just declared every man for himself, so I hightailed it out of there as well.  Later, Travis was loading fish scraps into a boat while I ate my desert wrap on the dock next to him.  Which brings us back to the beginning: Do bears eat desert wraps?

Now it is Monday, August 04, 2014.  Carrie was tasked with replacing rotted boards on the Red Lake boardwalk while I was tasked with jamming out to AC/DC on the dock.  What appeared to be one rotting board ended up being one rotted board and six rotted support boards.  Man, what a project!  She finally had the whole area dismantled when we walked up to the tool shed to grab the miter saw and some new boards.  There, in front of the small cabin, was a black bear, roughly the same size as last night’s.  We shouted at it, scared it away into the woods, and Carrie proceeded with her work.  Carrie then asked, “Why didn’t we take any pictures of that?”  So I went inside and got my camera in case this fearless bear came back.  Of course, it did.  Carrie spotted it lumbering out from behind the big cabin, heading down the hill towards the fish house.  This time, I was prepared: 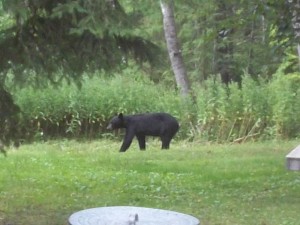 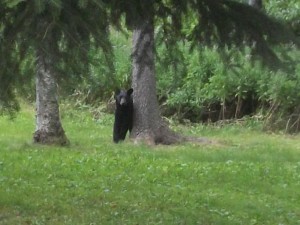 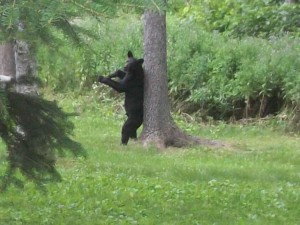 Sometimes it feels good to scratch an itch.

After our little photo shoot, we made a lot of noise so it would leave again.  Just as Carrie was finishing up the boardwalk project, we heard Cosmo barking his manliest bark.  I ran up to the main lodge and got Cosmo to calm down.  A guest reported that a small black bear was walking around and Cosmo noticed it right as the bear was heading back into the woods.  This lionhearted bear will not give up, and he has become Eagle Falls’ nosiest neighbor.   Hopefully he will find the fish scraps out on Parker Lake!  But, it is Monday night.  Travis’ quote of the day is, “I’m sure the smell of the fish fry will REPEL the bear.”