Welcome to a first at Eagle Falls Lodge – the first blog ever posted from the lodge! We are used to only posting once a week when we are in town, but we finally have internet working at the lodge.

Many of you know it has been a battle to install working internet service at camp. Satellite internet service was poor to non-existent the past two years so we tried a new system that works off the 3G phone network this year. The test unit worked great, but when we made the purchase our unit could not pickup a signal. We ordered a booster antenna and 8 weeks later when it arrived we thought we were set. After setting up several fancy roof mounts in various locations and failing to receive a worthy signal we were frustrated and back at the drawing board again.

Carrie and I resorted to walking around camp with the router plugged into a Power Pack in a last ditch attempt to locate a signal. Failing yet again we were walking back across the yard with the antenna pointed toward the ground when Carrie realized we were finally getting a signal! She had left the computer open and the internet was working! Upon further inspection, we determined there was only a two foot window of signal. So this is what the new antenna mount looks like. 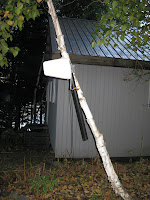 Yes, that is a bungee cord. The whole process reminded me of foiling the antenna on the basement TV when I was a kid.

Everything worked perfectly for 24 hours, until disaster struck. Cosmo was chasing a squirrel at full speed and tore right through the newly installed cable. The cable tore out of the antenna and the router. Thank goodness for duct tape. We are back in business now. So you can now bring along your wireless devices if you wish. And if you don’t want to, we totally understand. Sometimes having no cell phone or internet is better. The good news is we can get accurate weather forecasts and respond to emails faster.

Until next time, tight lines!