So this has been happening: 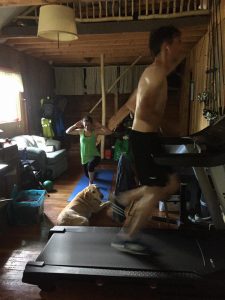 What exactly is this you ask?  Well this is the very official Eagle Falls Lodge gym in action.

It is no secret that Travis and I both run and this summer we are attempting to maintain some level of training as we have some races coming up this fall that we would like to not completely embarrass ourselves in.  And since we don’t have any roads readily available to run on, we sometimes resort to the treadmill or as I like to say the “dreadmill”.  You can see above, that Cosmo, aka, “coach” is right there with us to make sure we keep proper form and pace.  He especially likes to be right up on top of my yoga mat.  Coach gets tired pretty quick. As per usual there is a story behind the story on this one.

Flash back to 2009 real quick.  The 2009 Carrie didn’t know what was coming.  She was fresh out of college athletics and had literally not gone longer than a few weeks without running for about 10 years.  The 2009 Carrie was adamant about having a running option as she embarked on her Canadian adventure (2009 Carrie didn’t know what was coming, did she?).  Anyway, we bought a REALLY cheap (read small and ancient) treadmill on craigslist to bring up with us the first year.  It is hilarious to me that we did this.  This is the point in the story where I mention that I absolutely LOATHE, HATE, and DESPISE running on a treadmill.  Well, we brought it and I did pretty much zero running that first year. I’ll chalk it up to laziness I guess.

Flash forward to 2016, when we are both now fighting the aging process and are just competitive enough that it keeps us honest.  And that dinky treadmill from the mid 90’s has come in handy!  I had vowed to make this the year I embraced the treadmill.  I had figured out how to set up a movie on the table in front of the treadmill and with closed captioning I was set.  (This is depressing me just thinking about it because I still HATE the treadmill).  It was important to have this all figured out because Travis’ sister, Mercer, was headed up in June and she had a summer’s worth of cross country running to somehow keep up with.  The treadmill was key.

Mercer arrived, settled in for a day, got her summer training schedule out, and hopped on the treadmill on like day 2 of being at camp.  She ran for a few minutes, hopped off to grab something, got back on, and it just stopped.  Power gone.  She asked us if there was a trick to keep the treadmill going.  Oh, if only.  It just wouldn’t turn on.  We unplugged it for a few minutes.  We jiggled some wires.  We left it alone for a day to let it recover.  Nothing.  So, in a strange twist of fate we found ourselves ordering a brand new treadmill from Sears.  To be delivered in a week, because cross country training schedules are NOT to be messed with.  We can go ahead and put this in the “miscellaneous”expense category.

The day before the new treadmill arrived, Mercer and I hauled the old one to the dump.  We literally dumped it onto a massive pile of metal trash.  I should have taken a picture, because it was kind of hilarious.  It served us well for something with the technological capabilities of 1995.  I think we got our $50 worth out of that workhorse, right? 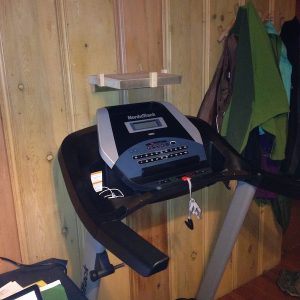 The new treadmill is lovely!  It has a giant command center like a spaceship and has shock absorption!  However, it is so giant that it blocked the previous movie set up.  Travis has installed a special treadmill movie shelf for our running pleasure.  You just set up the computer right on this handy shelf.  It is a bit concerning that this is the stuff we prioritize here at Eagle Falls, but when Coach Cosmo is watching you best keep up with your training regimen.  I still very much look forward to my town trips when I get to run on the roads, but in the meantime – dreadmill it is.