We are keeping a close eye on a huge forest fire burning in the Woodland Caribou Provincial Park just west of Red Lake along the Ontario/Manitoba border.  Most of Ontario is under an open fire ban currently due to unseasonably dry conditions.  This fire hasn’t garnered as much attention in the media as the Fort McMurray fire since it is only about 1/3 the size and hasn’t forced nearly as many evacuations, but the scale of this fire is staggering as well.

From Wednesday to Thursday the fire grew from 100,000 acres to 180,000 acres.  That is 281 square miles or about the size of seven townships!  The fire easily dwarfs an area the size of Red Lake.  If you know how that body of water is it gives you an idea how large the fire is.  Check out the map below from Wednesday to get an idea of the location and size of this fire.  The lodge is the highlighted dot. 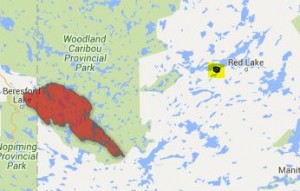 We aren’t too worried yet as we have a few things working in our favor.  The Ministry of Natural Resources is still classifying this fire as out of control, but it rained all day yesterday.  There is also rain and snow in the forecast for the next three days.  The closest part of the fire is about 30 miles away from us, but there is lots of water between us and the fire.  Ontario fire crews are also getting some help.  Minnesota is sending fire-fighting planes and twenty fire crews from Nova Scotia arrived today.

It is particularly troubling to see all of this fire activity in May which is usually not a dry month.  Hopefully that is not a bad omen for the fire season this year.  We’ll keep you posted on the status of this fire.