A number of our guests have captured some incredible pictures of birds so far this summer!  I thought we would share some of them with some fun facts.

Bald Eagle:
King of the jungle, so to speak.  Although they are commonly associated with the United States, where it has served as the national emblem since 1982, this bird has been a spiritual symbol for native people across North America for far longer.  We are a tad partial to them ourselves.  Seeing as we ARE Eagle Falls Lodge. 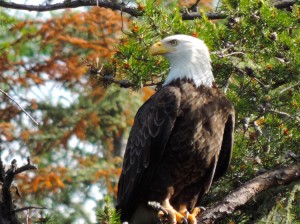 Osprey:
The osprey is also known as a fish hawk or sea hawk.  The osprey’s diet is made up of 99% fish, and their vision allows them to detect underwater objects from from 10-40m above water.  They mate for life and are found on all continents except Antarctica. 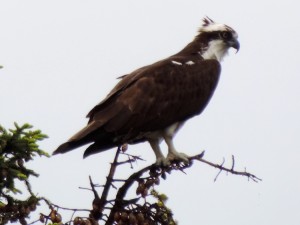 Loon:
The haunting cry of the loon is unmatchable.  It is something you have to hear for yourself to understand.  A lot of people are surprised to learn that these birds migrate all the way to Florida from their northern homes of Minnesota and Ontario.   They are very powerful, stealthy divers that much prefer water to land. 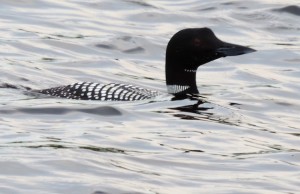 Blue heron:
These birds sport long legs, long neck, and a dagger-like bill.  We’ve had one hanging around above and below the falls all summer.  They move around slowly in the shallows and appear majestic in flight, but have a lightning quick strike to snag fish out of the water that stray too close. 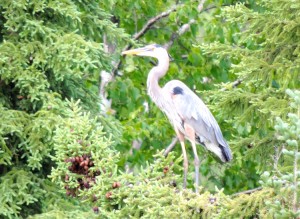 Merganser:
These large ducks have shaggy crests on the back of their head.  They dive underwater for fish and are frequently sighted on rocks around the lake.  In the winter they flock up with other fish-eating diving ducks such as Bufflehead, goldeneyes, and other types of mergansers.  The ducklings stay bunched as tightly as they can on the water to avoid falling prey to a big northern pike. 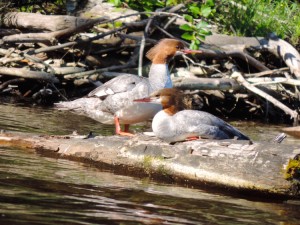 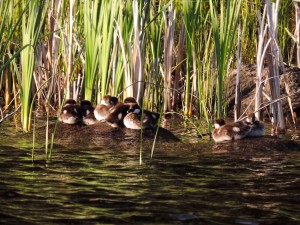 Yellow-bellied Sapsucker Woodpecker:
This gal has been a real treat this summer.  She has taken to pecking/drumming on the bat house outside of the small cabin.  It has this incredibly loud echoing sound.  Woodpeckers do this to establish territory against other woodpeckers.  They prefer to do said pecking at around 4am.  Like I said, a real treat. 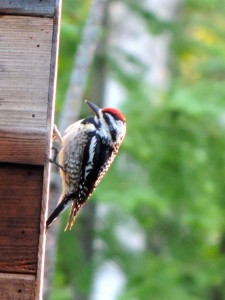