Reservations
Skip to content
We just finished our last sports show of the season in Minneapolis.  Thanks to everyone that stopped by to visit!  The Northwest Sports Show is huge and it’s always fun seeing guests and getting the chance to chat with other lodge owners and fishing vendors.  After talking to some folks in the Rapala booth, one of the lures we’re most excited about trying is the new Rapala series of lures called Scatter Raps. 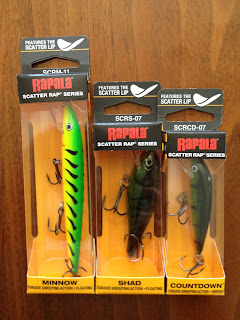 According the Rapala rep these lures are going to be game changers.  We obviously haven’t had the chance to try them out yet since they just went on sale in March, but the demonstrations we saw were pretty intriguing.  The lures feature the same bodies as many favorites in the Rapala line like the countdown, minnow, and shad.  They are available is several existing colors and some new colors as well.  The difference is a cupped “Scatter Lip” that is wider than the original lure versions. 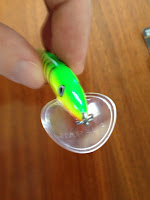 The wider curved lip causes the lure to imitate an erratic baitfish and it looked great seeing it run through a tank.  You can still control the lure to some extent by varying the speed of your retrieve.  A slow retrieve will cause the Scatter Rap to run straight, but a speed increase will cause it to dart to the left or right and trigger bites.
We picked up a couple different kinds to try and will report on them after we get a chance to try them this spring.  They retail for $8.99 and should be available wherever Rapala lures are sold.