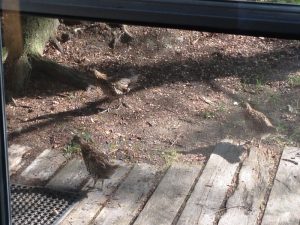 On Saturday morning we were milling around finishing up things before we went to pick up the next crew and right outside the door we saw a mama grouse and a whole bunch of baby grouslings (is that right?)  There were so cute.  It was as if their mama had taken them on a field trip, they were busy exploring everything in the yard right amongst the buildings.  Cosmo patiently watched them as we grabbed the camera and tried to capture a picture without disturbing them.  Above, you can see three of the babies checking things out.  Pretty soon the mama knew something was up and called them back.  Off they scampered into the woods.  We let Cosmo out, so he could quickly catalog their smells and tracks.  Good boy, Cosmo.

Speaking of which, he has been very busy keeping up with multiple security breaches as two squirrels continue to invade camp.  He bolts out the door as they chatter away at him all the day long.  They climb the tree trunk just high enough so Cosmo practically loses his mind.  It is keeping us all very entertained.  Those squirrels are definitely ganging up on him!  I keep telling him, if he catches one, I’ll cook it however he wishes.  Roast squirrel.  Fried squirrel nuggets.  Squirrel stew.  Whatever he wants.

Who cares about squirrels you say?  What about the fishing?  Fishing has been great!  Check back tomorrow for an update!