We’ve never had a “Guest of the Year” and I think of it as more of an honorary title than anything official.  But if anyone has earned it, it would be this guy: 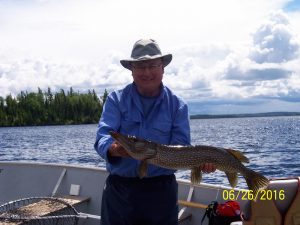 I know there is a pretty decent chance Larry will never even read this post.  He is not of the computer using or blog reading variety, but his story is too good not to share.  So if you are reading this, Larry, I hope you don’t mind.

Larry has been coming up to Eagle Falls since the Walt and Millie Rundle era.  He’s part of one of our longest standing groups that has been coming in June since just about when the lodge started.  These last few seasons he has extended his trip – 2 weeks in June and a return trip in August.  This year he was up for a total of FOUR weeks!  Two in June and the last two of the season.  I informed him that he was here for over 1/4th of the 2016 season.  He thought that sounded pretty good.  Larry claims that anybody who thinks they get relaxed during their first week, should try staying for two – that is when you get really relaxed!

This morning when I was bringing everyone back to town on the barge I watched him looking out across the water.  He always has his camera handy, and has contributed a bunch of really great scenery and wildlife photos to our collection over the years.  I asked him what was his favorite part about coming up here.

“You want me to name one favorite thing? Boy, that is pretty much impossible” he said.  With a classic Larry grin he claimed, “It’s pretty much all my favorite.”  And then he launched into a story of when he was back in that bay just east of camp….

That is what I love about Larry. He tells the BEST stories. Unbelievably entertaining stories. He is a true adventurer.  He can recall just about anything. And he appreciates good food as much as I do, so we love swapping stories about great meals we’ve had. I’m usually pretty hungry after these discussions. Hungry and happy.  People like this, from his generation, need to have their stories told. Their experiences, vantage points, wisdom, and character are unmatched.  They are at risk of being forgotten.  They need to be written down or recorded.  They need to be listened to by any and everyone.

So I want to thank Larry.  Thank him for sharing his stories and his passion for adventure and life.  Cheers to you, Larry!  And thanks for being such a loyal guest of Eagle Falls Lodge.