We have an incredible video to share today.  Imagine the most unlikely circumstance of actually getting a fish in the net and it might be close to what this video shows.  When Travis’ siblings, Carson and Whitney, were at the lodge they did some kayaking and not only caught an impressive Muskie but caught it on Carson’s GoPro camera.  The result is pretty unbelievable.

For those of you who know Carson, you know he is of the adventurous spirit.  And he LOVES catching fish, and this fish did everything to not get caught.  Carson persistently kept at it from the back of the kayak, while Whitney patiently held the net in the front ready to assist.  It is safe to say that they both get equal credit in the catching of this fish.  So fun.  We miss them already!  Click on the link below to watch the video on youtube:

Here you can see Carson and Whitney, respectively, with the muskie they both worked hard to catch! 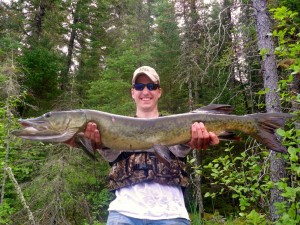 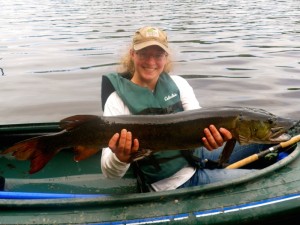 This Muskie was 39″ long and was successfully released.  Thanks guys!