We’re almost certainly looking at a late ice-out date this year for Red Lake.  It’s hard to believe we’re already past the date of ice-out a year ago (April 15th).  That was a record for earliest ice-out eclipsing the average ice-out date of May 8 by over three weeks. 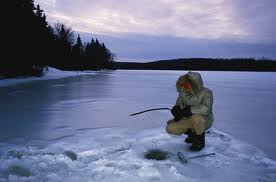 Red Lake still has 3 feet of ice with insulating snow on top so we’d be pretty surprised if the ice goes out before May 8th.  The record late ice-out date is May 23rd – that fact courtesy of Dan at Bow Narrows.  We are optimistic the ice will be out by then, but we may have a tight window to get the camp up and running.  So the important question is how will a late ice-out affect fishing?

I’ve never fished Red Lake on the heels of a mid to late May ice-out, but my expectation is for fishing to be extremely good.  Northern Pike usually spawn first or when water temps start near 40 degrees.  Walleye begin spawning shortly after when water temperatures reach 40 degrees and continue until temps hit the mid 40s.  The smaller males will move shallow first followed by larger females.

The length of light in the day also can affect spawning times, but the spawn could be pushed back to later in May due to the colder spring weather.  This means we may find Walleye and Northern Pike in very shallow water with healthy appetites especially compared to the early ice outs we’ve experienced lately.  My other cold water experience would suggest trying smaller baits and slower retrieves.  We’ll try pitching jigs near the warmest shorelines in shallow bays and provide a report as soon as we can next month.