So I know Travis said we were really busy closing up the camp – which we are, I assure you.  However, we did take a full day hiatus to get some seriously overdue fishing in.  Travis is the best for lots of reasons, one of which he takes care of EVERYTHING when planning an adventure day.  All I have to do is make sure I wear enough layers of clothing so I don’t get cold and that I pack enough snacks for a small army.

Sidenote: We watched part of the Patriots/Jets game last night and the only thing I really committed to memory was about a player (not sure which team) whose nickname was “snacks” and Travis and I both agreed that would be the perfect nickname for me as well.

Travis had been wanting to venture into a smaller lake in the area to do some muskie fishing.  I had never actually seen or caught a muskie before so I was game.  Travis loaded the tackle box with lots of ridiculous looking lures of giant proportions to help our chances.  I was having to take a break every 10 minutes from casting because my wrist was hurting.  For reel.  Heehee.  See what I did there?

The weather was pretty favorable on Wednesday, although we did have some lightning and thunder the night before.  It was partly sunny with some wind.  I learned muskies like to sun themselves, so this is good.

We had been casting for a while and I had been practicing my “figure eight” at the end of each cast (I’m telling you it will wear you out!) and dutifully watching to see if I got any follows.  Muskie are notorious for just popping up from the deep to watch your lure.  They are a very cautious and calculating fish species.  Chances are you will see some, but may not actually get any to strike.

Well let me tell ya… I got one to strike, my friends.  I  was reeling in a cast and contemplating taking another break to rest my wrist (say that 10 times fast) when BOOM!  There was a bit of a swell on the water surface and it instantly felt like something had slammed into the end of my line.  I was fairly certain it was NOT snagged on a rock.  I “calmly” (read: NOT calmly, but in fact with a voice full of panic) told Travis I thought I had a hit.

Oh yeah, I forgot to tell you I had been using a slightly broken reel.  Which means when you have a huge fish on the end of your line it can become slightly problematic.  I kept reeling in the fish, but letting it take out line if necessary, terrified of losing the fish the entire time.  Travis was getting our massive net ready when the fish went under the boat.  For those of you who don’t know, this can be very bad.  Especially when you are using a broken-ish reel.

The pull at the end of my line was all of a sudden gone.  I thought I had lost it!  I have no idea how, but all of a sudden I could feel the weight again, however the line had wrapped around the rod mid-way down and my reel was officially broken at this point.  Meaning I can’t bring the line in anymore.  Not a good scenario.

Somehow Travis netted the fish.  I’m telling you, he is awesome!  Best guide I’ve ever had.  We left the net in the water which was so big at first I didn’t even see the fish in there.  I kept asking, “Did we get it?  Where is it?  Is it big?  I can’t see it.  Are you sure its in there?”  It is so weird how the fish just kind of stop and stay still once in the net like that.

We wanted to act quickly.  Travis got the hook removed from the fish while keeping the net in the water.  I wish we had a video camera zoomed in on me during this entire process.  It would be hilarious.  I’d like to think that on the outside I was somewhat calm and collected, but inside I was like a little kid flailing my arms around running in circles like someone just gave me a pony while I was being chased by a terrifying monster.  I think my heart may have stopped.

We got the fish in the boat and measured it.  Again, acting as quickly as possible.  We wanted to get my picture and get the fish back in the water.  One slight problem.  I was scared of holding the fish.  I KNOW!  I don’t know why.  I have no problem swimming in the water where these fish live, but when it is in my boat and I can see their massively sharp teeth I just can’t do it.  Plus this fish was HEAVY.  I’m in decent shape.  I can lift big propane tanks and help Travis move motors around, but I couldn’t get this fish off the floor of the boat.  I told Travis we should just get it back in the water (I get really paranoid about keeping a fish out of the water for too long) but he said “You are holding this fish and we are getting your picture!”  Okay, okay.

Here was the first picture he took: 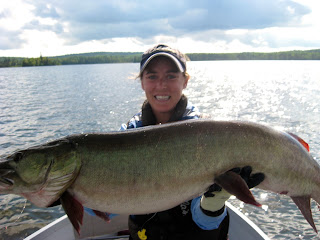 We may have needed a bigger boat, no?
How about this one: 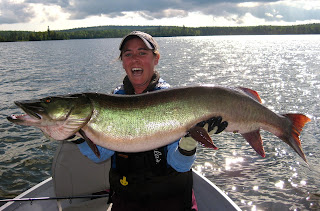 44.5 inches – and what a FAT fish!
If you can’t tell, I am struggling to keep that fish up for this picture.  I probably didn’t do it justice.  That fish was impossibly hard and scary to hold.  I could barely hold it up!

After we released the fish back into the water we noticed that my lure had been completely ripped in half! 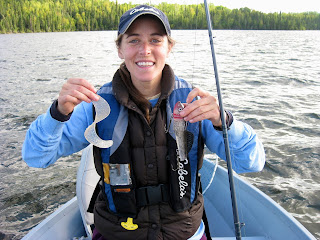 We also had to search the boat to find the various parts of my broken reel to try and put it back together.  I had to be very cautious the rest of the day with the stupid thing.  It is officially out of commission.  Totally worth it though!
Travis also had four really good follows which we could see from the boat, but nothing actually hit.  Oh well.  All in all it was a really fun day.  We will definitely be back!