The Ministry of Natural Resources (MNR) reported recently that the spiny waterflea has been found in the Chukuni River which is part of the Red Lake water system.  This is not great news and it will likely have an impact on the fishery. 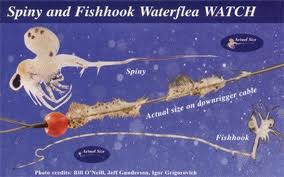 Spiny waterfleas are small aquatic predators from Eurasia.  They first appeared in the Great Lakes in the early 1980s from ballast water out of ocean ships.  They can reproduce asexually by cloning so the population can grow quickly.  Spiny waterfleas consume other zooplankton and reduce the native population of zooplankton by 30-40% on average in the lake.  This is bad because zooplankton are a primary food source for small fish such as young walleye and yellow perch.  This can cause a ripple effect in the fishery.  So, what can you do to help?

There isn’t anything we can do to remove the spiny waterfleas from Red Lake.  But we can take several steps to stop the spread of this invasive species to other lakes in the area – especially Parker Lake!

Be sure to rinse angling equipment (rods & reels) as well as empty water out of bait buckets when switching from Red Lake to Parker Lake.  We’ll likely setup a rinse station for you to hose down gear when transitioning.  You can also help stop the spread of invasive species by never dumping bait buckets into the lake.  Dump unused bait on land.  Also, if you bring your own boat, be sure to drain the boat including all live wells and bilge waters when moving between bodies of water. Remove all aquatic plants, mussels, and weeds from the boat and trailer.

We’ll continue monitoring the situation to see what kind of impact this invasive species will have on the Red Lake system.  Meanwhile, we’ll do everything we can to prevent it from spreading!