Reservations
Skip to content
Hi everyone!  Eagle Falls Lodge is undergoing its seasonal transformation.  The power is on, the water is running, new mattresses are on the beds, and the boats are starting to hit the water.  The camp wintered pretty well (only 5 leaks that have already been repaired)!  The new water system is still in the works, but should be completed before week 1.
We made a little time to test out one of the motors this afternoon and chase some Northern Pike.  No monsters yet, but we found a few hungry fish.  The water level was perhaps down slightly, but not far off the average.  The high water we’ve seen at times especially in 2009 and 2010 makes the lake seem low, but it looks comparable to last season right now.  It was surprising to see some weed growth with a healthy start already and much more weed remnants from last year than we are used to seeing.  Likely a result of the mild winter combined with an early ice out. 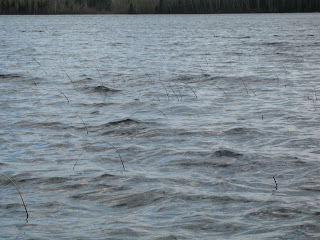 Above is the rocky reef north of the 3 islands on Parker.  We don’t usually see weeds until June. 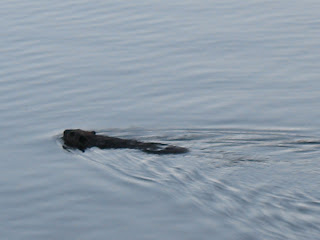 Two beavers came to visit this evening.  We have already seen
eagles, ducks, loons, bears, and a moose as well. 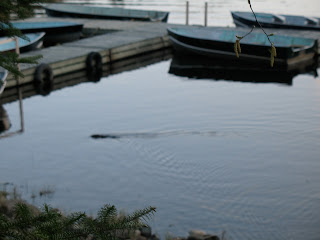 Beaver in the water + boats (without motors) in the background.  We thought they might come ashore, but Carrie scared them off trying to get a photo.
We still have loads of cleaning to do, some dock repairs, and motors to test so we should stay busy.  Until next time, tight lines!