It’s mayfly time again at Eagle Falls Lodge.  There was a significant hatch on Parker Lake mid-week last week.  On cue, it’s about a week later and the guys are now reporting seeing some mayflies on Red Lake. 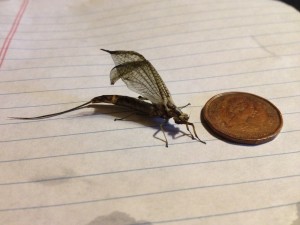 Here is a mayfly next to a Canadian penny to give you an idea of their size.  (Side note…Canada no longer mints pennies so if you pay cash for something the store rounds to the nearest five cents.  Interesting, eh?  Back to mayflies…)

Mayflies are in the same insect grouping as dragonflies.  An adult mayfly has a very short lifespan, ranging from a few hours to just over a day.  They mate and eggs are laid on the surface of the lake where they sink to the bottom.  Over the next several months immature mayflies molt 20-30 times.  After developing wings they will molt one more time, making them unique since they are the only insect species to do so.

Walleye and Northern Pike love to chow down on mayflies.  So is this good for fishing?  My answer is yes and no.  In the early stage of the hatch, the fish are in feeding mode and hitting well.  They are feeding on the mayflies as they rise to the surface during their adult transformation.  We’ve even seen them come up to the surface to slurp up mayflies.  After a heavy hatch though, it seems as if the fish are stuffed and the bite slows down for a day or two.  That’s the nice thing about having two different lakes though.  If a day or two fishing slowdown takes place, it will occur about a week apart on the two lakes so you can move and keep catching fish.