Reservations
Skip to content
Happy Canada Day everyone!  Just wanted to pass along an update on the mayfly hatch since we have fielded a few questions on the issue earlier this season.  There was a significant hatch on Parker Lake in the middle and end of last week and I noticed a large number of mayflies on Red Lake yesterday and today.  They are all over the surface of the water and clinging to some screen doors and windows like the one pictured below. 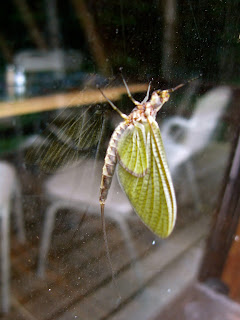 Mayflies are in the same insect grouping as dragonflies.  An adult mayfly has a very short lifespan, ranging from a few hours to just over a day.  They mate and eggs are laid on the surface of the lake where they sink to the bottom.  Over the next several months immature mayflies molt 20-30 times.  After developing wings they will molt one more time making them unique since they are the only insect species to do so.

Walleye and Northern Pike love to chow down on mayflies.  So is this good for fishing?  My answer is yes and no.  In the early stage of the hatch, the fish are in feeding mode and hitting well.  They are feeding on the mayflies as they rise to the surface during their adult transformation.  We’ve even seen them come up to the surface to slurp up mayflies.  After a heavy hatch like this though, it seems as if the  fish are stuffed and the bite slows down for a day or two.  The last four seasons we’ve seen the mayfly hatch in either late May or early June so that shows how far behind we still are on our seasonal patterns.  We’ll post a fishing report later this week to let you know how this week’s group does.