Last night Carrie decided to head out with a couple of the guys to get some fishing in.  We’re nearly into the last month of the season so the pressure is mounting on the big fish competition between us.  Carrie has beaten me in three out of the past four seasons so I’ve been determined to even up the score.   I thought I perhaps had it locked down with the 26″ fish I caught during the first week of the season.  Key word…thought.

Dave & George were nice enough to let Carrie jump in the boat with them.  I warned them before they left to not put her on anything TOO big.  To be exact, nothing over 26″.  Less than 5 minutes after they started fishing, she landed this beauty! 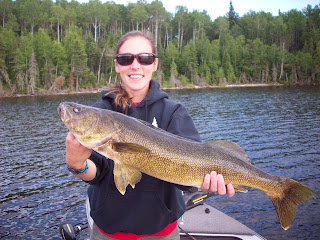 A 28.75″ Walleye off Red Lake, the biggest walleye caught and released this season!

The hostess isn’t supposed to outfish everyone else.  But I learned a long time ago, there is no fishing justice.  Most guys spend 60-70 hours each week pounding the water and Carrie has probably fished less than 10 hours total the entire summer.  That’s the way it goes.

This was right about the same time I was licking the Cool Whip container during supper clean up.  I think instead of doing dishes tomorrow, I may be at least fishing from the dock.  I won’t beat that fish standing in the kitchen!