Fishing is definitely the main attraction at Eagle Falls Lodge, but there are plenty of other perks as well.  You get to see plenty of cool things you can’t find in the city – one being aurora borealis or the much more recognized name ‘northern lights’. 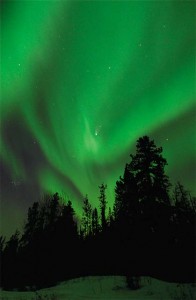 We usually see fantastic displays of northern lights several times throughout the summer.  The phenomenon is a result of solar storms sending charged particles toward the Earth.  The colors we see (usually green and sometimes red) dancing across the sky occur when these particles collide with the Earth’s magnetic field in the upper atmosphere.

There are two websites we like to use to check forecasts for the Northern Lights.  Yes, much like your local weatherman these forecasts can be inaccurate, but we have seen great displays coincide with a positive forecast plenty of times.

One site is the Space Weather Prediction Center operated by the National Oceanic and Atmospheric Administration (NOAA).  They publish a three-day forecast here http://www.swpc.noaa.gov/node/114 and a 30-minute forecast here http://www.swpc.noaa.gov/products/30-minute-aurora-forecast.  They give a good explanation of the data used to create their prediction models.  Based on your location, you can determine your percentage chance of seeing the northern lights.

Here is what the NOAA forecast map looks like: 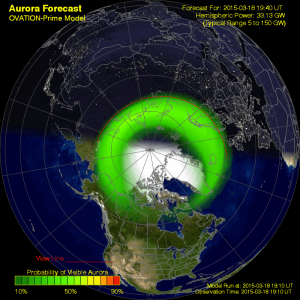 The second site is maintained by the University of Alaska’s Geophysical Institute.  http://auroraforecast.gi.alaska.edu/  The site sets a value on a scale from 0-9 on the likelihood of aurora activity.  They also list the range of cities as far to the south where the northern lights are likely to be seen.

A great way to keep an eye out for the northern lights on your trip to the lodge is to fish late.  On a clear night, you can capitalize on the terrific fish bite around twilight while keeping watch for the sky to unleash a dazzling color show.