Well, the first week of the 2014 season is in the books.  A huge thank you to the guinea pig group this year.  What a fun group of guys and they were great about being understanding with all of our late ice-out challenges.  Travis and I are still playing catch up, but I’d say things are reaching a more normal level of crazy vs full blown crazy.

As we loaded everyone up for the ride home they had full bellies (another cream puff, Jesse?) fish in the coolers, and a week full of fishing and camp stories to share once home.  These guys were troopers this week and caught some awesome northern while they waited patiently for the walleye to really turn on.  Which of course started happening at the tail end of the week.  Oops.  The late ice-out has everyone confused I guess.

Check out these nice slot and trophy northern caught on both Red Lake and Parker Lake: 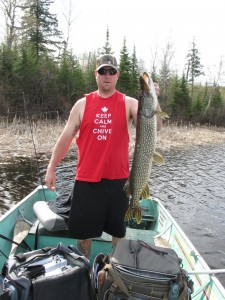 Sean with a 38″ northern 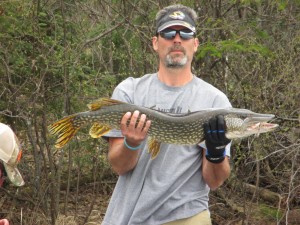 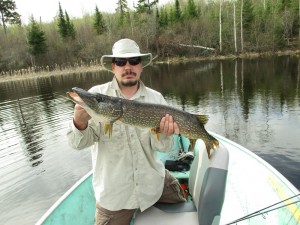 Jesse with a 32″ northern.  Jesse also caught a 19.5″ small mouth off of Parker.  He caught it in the rain without a camera in the boat.  Major bummer, but still an incredible catch! 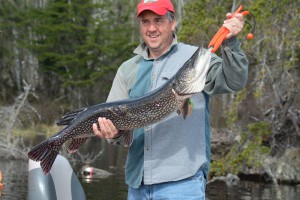 Rob caught this beautiful 42′ northern – what a catch! 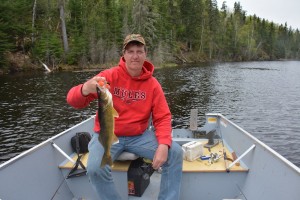 And Terry with a walleye – finally!  He kept catching pesky northern all week and was about to go nuts!  Thanks for hanging in there, Terry.

Terry’s son, Jared, had an unexpected catch.  He caught a 39″ muskie on Red Lake while fishing for northern. 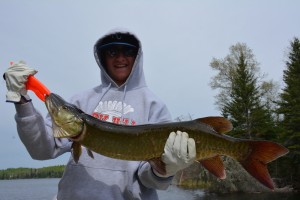 Sean also caught a monster muskie.  Could this be the year of the muskie? 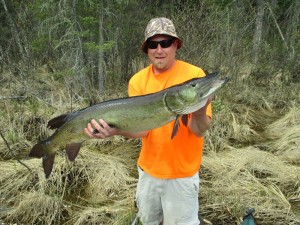 That fish beats my muskie from last year, dang it.  What an incredible fish!  It will be tough to be, for sure.  All the trophy fish above were caught AND released.  Thanks, boys!

You are wondering about the bear part of this post?   Well, I hate to do this but I’m going to have to leave you hanging.  There are groceries to pick up, cabins to clean, and if we are lucky – naps to take!  Check back in tomorrow!

Have a great weekend!