The battle for Northern Pike supremacy heated up last week.  As you recall, four fishermen and women were tied for the biggest Northerns of the 2012 season with 42″ fish.  Last week we saw a flurry of big Northerns caught.   The record changed hands three times in 48 hours.

Denise caught a 43″ Northern on Tuesday afternoon on Red Lake. 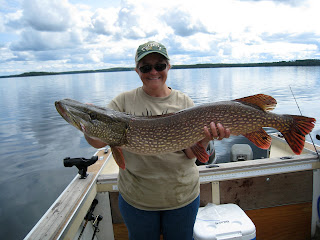 Terry topped that on Wednesday afternoon with a 44.75″ Northern caught and released a few yards off the Parker Lake dock.  We hope to have a picture soon, but I can vouch for it since I was the one that measured it on the dock. 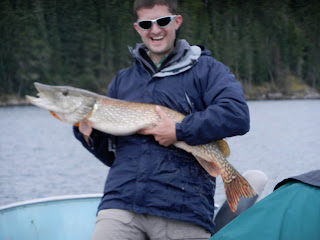 Denise struck again on Thursday morning.  She caught and released this 45.5″ Northern on Red Lake to reclaim biggest fish on the board for the season. 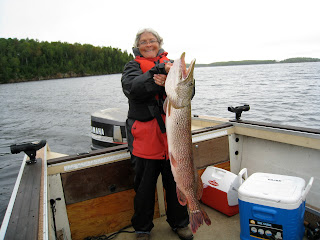 We have a large group this week all chasing Northerns again so we’ll see if anyone can dethrone Denise.  They already released two 40s, a 42″, and a 44.5″ fish in the first couple hours on the water today.  Stay tuned…