Reservations
Skip to content
I believe in the last post I hinted to the fact that the group this week would most likely bring in some very nice fish.  Well, they aren’t ones to disappoint.  Most of the group front troll for northern pike during their stay.  Apparently Tate was getting tired of catching northern pike (he caught a 44″ northern on the FIRST day!) and decided to mix it up a bit. 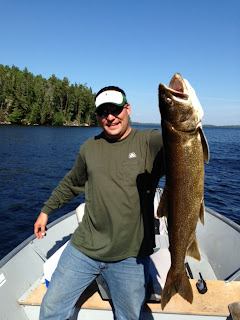 Tate landed a 33″ lake trout on Red Lake!
Who knew you could catch a lake trout front trolling a giant Grandma lure designed for northern pike and muskie fishing!  Tate’s lake trout was nice and healthy looking too which we like to see.  Lake Trout are catch and release only on Red Lake, so this lunker went right back into the water.
We don’t get any guests that specifically target lake trout during their fishing trip, but as seen above you can definitely find some big lakers in Red Lake!  This is actually the first trout a guest has “accidentally” brought in the boat this season.
We will have more pictures of BIG fish at the end of the week.
Two completely unrelated comments:
1.  Who turned the heat back on?  Holy hotness!  It is going to push 90 degrees today, folks.  I will remind you that less than 2 weeks ago I was wearing my long underwear around camp.  Not cool.  Good news is it doesn’t look like it will stick around.
2.  We have reached over 30,000 hits on our blog!  I know that is virtually nothing, but we can’t help but believe some people are actually checking in on us.  We feel humbled.  Please let us know what you would like to read about or see on the blog in the future!