So where were we?  Oh right, Carrie and I had hiked three miles through the bush to an infamous muskie lake and a giant one had just T-boned my bait mid-air.

When fish and bait splashed back into the lake, I attempted a hook set and felt the bait slip, but the fish was still on.  The big heavy rod was bending hard.  The monster made a big run into the weeds and I was overcome with the sinking feeling we’ve all had when I felt the weight of the fish disappear.  I retrieved what was left of my Bulldog and discovered the fish had never been hooked!  It hit too far back to catch the hooks, but sliced the long grub-like tail right off the bait. 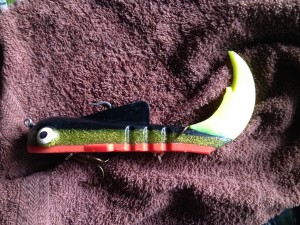 An exciting, albeit disappointing start, but the lake was full of promise now.  So we kept fishing.  I tied on one of my brother’s favorites – a firetiger colored Mepps Musky Maribou.

We made it down one side of the lake with the wind and no more sightings.  As we started to work back into the wind with the paddles, we realized it was going to be tough going.  The wind was really cranking and with only one of us paddling we were losing ground.  We both paddled hard for a minute, casted quickly, and resumed paddling.  It was slow going with plenty more paddling than fishing. 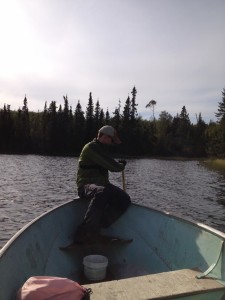 As we quickly worked another weed patch, I watched a muskie dart out of the weeds and smack the Maribou right by the boat.  It made a big run and the fight was on.  Another downside of not planning to use a boat was not having a net.  We were stuck hand landing, but fortunately this fish didn’t escape. 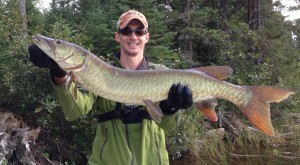 Believe it or not, this 37″ barred muskie is only the 2nd muskie I’ve ever caught!  I’ve boated over a dozen in our time as owners at Eagle Falls Lodge, but always as the net man and never with the muskie on my line.  It was pretty fun to finally track down one of these elusive fish and get to reel it in too!

I ended up getting back in the water to make sure this fish released okay and had some déjà vu from earlier in the day when the muskie turned and coasted right up to me with its nose near my shin.  I thought it might try to exact some revenge, but instead it glided by into deeper water. 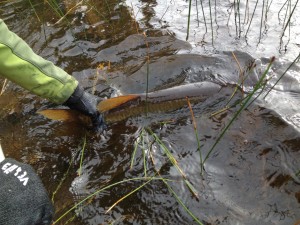 I hopped back in the boat and we both got back to casting.  Two casts later, another fish hit!  This one was a 35″ barred muskie.  The Musky Marabou was hot!

As we paddled back to shore at the end of the day, Carrie completed the hat trick on a black Mepps Musky Marabou with this 23.5″ fish.  This barred muskie may have some growing up to do, but still counts as a muskie. 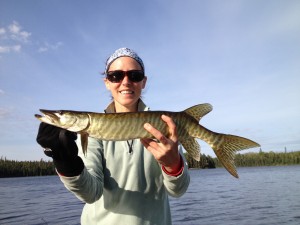 I’ve never boated that many muskies in one outing.  To take pictures of three muskies was incredible.  And they’re all back in the water to get bigger for next year.  Plus, that super tanker is still lurking in there too.  It was a great way to end the season for us as the sun sets on 2015. 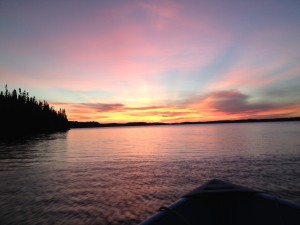