The 2015 season was over for us quite a few days ago.  But we made time for one last adventure to chase the elusive muskie before departing this fall.

Many of you are aware there is a chain of lakes southeast of the lodge where muskies have secured the upper hand and are the dominant fish in the lake.  The lakes are difficult to access and not heavily fished which adds to the allure.  We’ve had a small handful of people fish Paulore, Flat, & Russett Lake, but my interest was in attempting to make it to Spires Lake.  I hadn’t known anyone to fish it and it presented a challenging hike to get there.

We started early on a Saturday and boated back to the town of Red Lake with only the essentials – two heavy muskie rods, small tackle box loaded with big baits, map, compass, GPS, water, and plenty of snacks for Carrie.  I’d like to tell you what time we started, but telling time was difficult due to a mishap with some bug spray.  Note, never spray anything with high concentrations of deet on gear such as a watch or this may happen to you too. 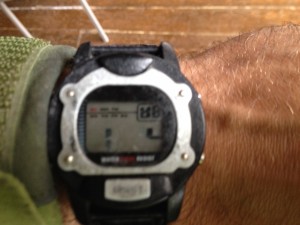 We loaded everything into the Suburban and drove down highway 618 toward the town of Madsen.  We turned off on the gravel Suffel Lake Access Rd. and turned again on an old logging road heading north toward Spires Lake.

The trail looked good enough for a vehicle early on, but we soon got into trouble.  What looked like a shallow puddle was much deeper than expected and before I knew it, we were stuck in the middle with water up to the floorboard.  The ’98 Suburban is starting to show its age and is a bit temperamental on shifting into 4-wheel drive.  A bad feeling creeped into my stomach when I realized we had neglected to bring a chain, strap, or come along tool.  But, at last the Suburban shifted and we were able to wiggle back out of the small lake in the road.  We decided to not push our luck, parking the truck and setting out on foot.

A three mile hike landed us near a fork in the trail.  On the satellite imagery near the lake there appeared to be two small trails approaching the lake – one on the south side and one on the north side.  We were planning to fish from shore, but these lakes are notoriously difficult to shorefish and I wasn’t sure which approach would be better.  We gave the south leg a try.  The trail shrunk and the puddles increased in frequency causing us to be creative in keeping our feet dry.

We did see plenty of bear and wolf scat, but fortunately no personal encounters. 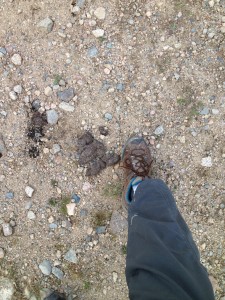 We finally reached the lake and the feeling of elation of finally seeing muskie water was overshadowed by a feeling of disappointment.  There were three boats on the shore and someone fishing in one on the water!  We had hiked over an hour through the Canadian wilderness and there was a mini-fleet on the shore of this desolate lake.

Not to be deterred, I immediately started casting from shore.  I sacrificed the dry shoes and waded out to be able to cast a larger area.  This is a little bit un-nerving as the thought of a super tanker muskie following up a bait close to my legs was not a pleasant thought.  Shortly after we arrived, three locals came back to shore in their boat to leave for the day.

They confirmed there were indeed some giant muskies in the lake.  They usually just fished for walleye, but shared some stories of some lunker muskies attacking their stringer.  They also indicated the owner of the boat didn’t mind if it was borrowed as long as it was cleaned out. There was no motor so we borrowed two short paddles.  The adjustable one wouldn’t lock into place which made it pretty tough to use. 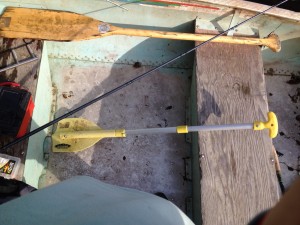 Also, no plug so we had to improvise with wood. 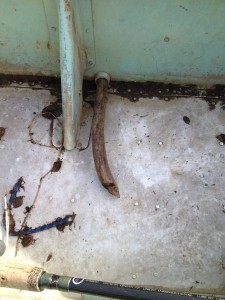 It was a windy day so we drifted with the wind while casting near the shore.  Behind one point was a nice weedy pocket.  I worked all along it, but nothing.  No strike, no follows.  There was a very narrow path perhaps just wide enough for my big Bulldog to squeeze through along the edge of the weeds to some very shallow water behind the weed bed.  It couldn’t be more then a foot deep.  I picked up the paddle to move along, but then thought why not give it a shot?

I switched out the paddle for the rod and fired a cast all the way to the back.  I cranked quickly to keep the bait from snagging on the bottom and flipped the rod up to skip the big Bulldog over a log.  My bait popped out of the water, but before it could clear the log an enormous muskie exploded out of the water like a missile and latched onto the Bulldog.  This muskie certainly met the definition of super tanker muskie.  It was the biggest one I had seen since boating my 50″ fish 12 years ago.  Both bait and fish were headed through the air toward the boat.

Find out what happened in part 2!