The Parker Nine?  Sounds like some kind of outlaw gang right?  Well maybe an outlaw gang of sorts, but this is what we’ve dubbed the wolf pack patrolling the shores of Parker Lake.

We had a wolf encounter in camp this spring during opening.  We have also heard howling multiple times this summer at night.  Cosmo isn’t sure what to think of his long-toothed cousins, but he listens intently when they are howling.  Guests have spotted wolves along the shores of Parker Lake twice this season.  That is a lot of encounters for an animal that is stealthy and seldom seen.  This is my 22nd year coming up to Red Lake and I’ve only personally seen a wolf twice.  A sneaky wolf is a tough photo subject and we have yet to capture any pictures.

Here is a our visual approximation of the pack leader. 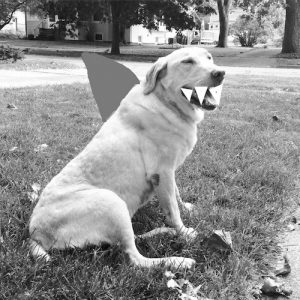 Our friends at Red Lake Outfitters confirmed they have seen wolves frequently around Parker during winter flyovers.  They counted the pack size at nine and observed them making moose kills out on the ice.  Maybe you’ll see one of the Parker Nine during your trip (hopefully from the safety of your boat!)