Last week I briefly mentioned a special dessert we enjoyed out at the lodge that I wanted to tell you guys about.  Well, this story really starts two years ago during the 2010 summer in August.  Travis had just arrived with our group on Saturday and we were busy unloading everything into the cabins when I miraculously heard the phone ring.  It was Wayne Aiken back at the landing calling to tell me our other group had arrived.  I instantly got sweaty.  I calmly asked Wayne how many of them were there (4 people) and I asked him what their names were.  He told me it was Jim England’s group.  At this point I had stretched the phone cord on the bag phone as far as it would go and had reached out to grasp the schedule list of who we had down for that week.  I quickly peeled over the 2010 reservation list and did NOT see anyone named Jim England – party of four.  As far as I knew I had never met or heard of Jim England or his plans to come to Eagle Falls Lodge.  Oops.  Thats what we call in the business a big, fat, lodge FAIL.  I told Wayne to pass on the message that we were on the way to get them and sorry about the delay.
We then had to rearrange our current guests to leave enough room for Jim England and we raced across the lake to pick them up.  Thank goodness Jim, Rick, Dan, and Myrle were good sports about the whole mix up that we, of course, felt terrible about.  Don’t feel too bad for them, however, because they made sure to remind us about it ALL week long.  Kept asking if we had enough food for them, or should they wait to see if there were any leftovers. They fit right in to our Eagle Falls Lodge family.
Sometime during that week I was sitting in the lodge asking Jim about where he was from, what he did, etc., and he let it slip that he owns a homemade ice-cream shop.  Let me repeat that.  He OWNS a homemade ice-cream shop.  I was like Cosmo on steak night the rest of the week – drooling and slap happy thinking about ice-cream.  I very plainly (much to Travis’ dismay) let him know how interested I would be in some of this said ice-cream.
Fast forward to 2012.  We triple checked and confirmed Jim England’s week, group size, arrival time, to make sure there were no slip-ups.  About the week before their arrival Jim emailed and asked the much anticipated question of what ice-cream flavor I would like.  I responded casually saying something about whatever he thought was best, something in season would be nice, but immediately started counting down the days until my ice-cream delivery would arrive.
Let me tell you, it was well worth the wait!  Jim brought me 2.5 gallons of homemade fresh blackberry ice-cream, sweet glorious made-with-real-rich-cream-ice-cream.  Yep, we have the best guests ever for sure.  I think I had about 20 bowls before the first half of the week was over.  I hadn’t even made a dent in the ice-cream bucket so I very graciously shared it with the whole group that week.  What a treat! 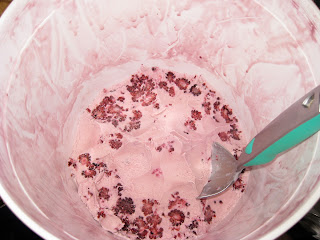 I am one happy girl in this picture with Jim, and with a belly full of tasty ice-cream. 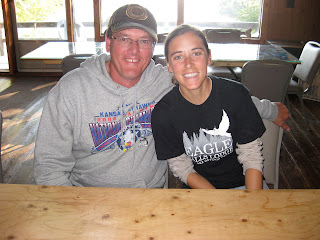 For those of you lucky enough to live near Olathe or Lawrence, Kansas you HAVE to go to Sylas and Maddy’s ice-cream shop to confirm for yourself how delicious it is.  To go to their facebook page click here for more information.

Here is a picture of Jim’s group from last week – don’t they look like some of the best guests ever? 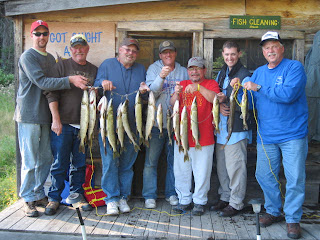