This season has been a boom year for smallmouth bass on Parker Lake.  In the past we have only seen a handful caught each season, but over 20 have been released this year!  Historically, smallmouth bass aren’t native to this part of the world.  They were actually stocked by the Ontario government in many lakes in northwestern Ontario in the early 20th century.

I’ve heard stories from a few guests about smallmouth bass overrunning walleye populations and destroying other lakes in Ontario, Minnesota, & Wisconsin.  Of course walleye are an absolute favorite target of most anglers visiting the lodge so I decided to do some research and see what I could find. 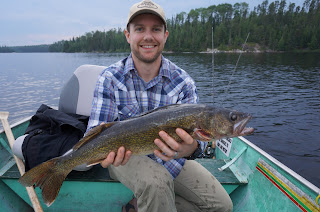 Nate has one of the bigger walleye off Parker Lake this season.

After reading numerous studies I can’t find any that support the notion that smallmouth bass destroy walleye populations.  The fears that smallmouth bass actually consume young walleye in significant numbers or outcompete walleye for the food source in the lake are myths according to my research.

The various studies examined the relationship between walleye and smallmouth bass abundance at lakes in New York, Wisconsin, Minnesota, South Dakota, Manitoba, & Ontario with varied time frames of a few months to 36 years!  No significant evidence was found to show that smallmouth bass limited the walleye populations whether by consuming walleye fry or outcompeting walleye for food.  Walleye population declines and subsequent bass increases were often long-delayed suggesting that over-harvesting, and not bass, was the contributing factor.

The only study I could find that was conducted in a controlled environment (tank instead of lake or reservoir) determined that competition for food between smallmouths and walleye only began when forage fell below 30% of what is required to only maintain a fish’s weight.  That number represented starvation and is far below current forage levels of perch, minnows, and crayfish found in Parker Lake and Red Lake. 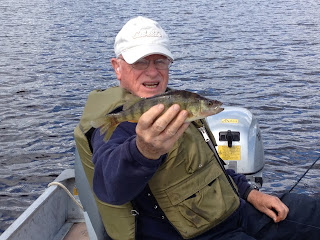 So, what do they eat?

In Ontario, walleye primarily forage on yellow perch.  Research shows that perch consist of 60% – 90% of their diet and they fill out the rest with a small percentage of crayfish and other minnows.

The smallmouth bass diet primarily consists of crayfish (again 60% – 90%) and is filled out with perch and other minnows.  Their diets vary enough that they don’t directly compete for food.  Studies that analyzed stomach contents of both species rarely found one species in the stomach of the other.  It was more frequent to find that larger walleye had actually eaten smaller walleye! 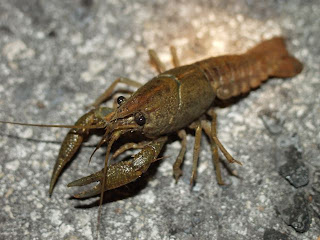 Crayfish are found in Red Lake and Parker Lake

To be clear, introducing a non-native species to a waterbody is extremely risky and not a good idea.  There are many factors to consider and potential negative effects that haven’t been realized.  With that being said, the smallmouth bass population in Parker Lake seems to be growing and the walleye population appears as healthy as ever.  Adding the battles that smallmouth bass put up to the traditional walleye and northern pike fishing experience will certainly enhance your trip. 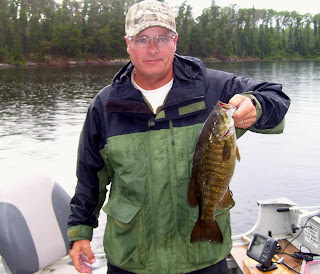 Jim has the 2nd biggest smallmouth of the season – 17″

As long as forage populations remain plentiful, the walleye population should remain healthy and can co-exist peacefully with a healthy smallmouth bass population.  We encourage you to keep releasing smallmouth bass and writing them on our catch and release board (any size) so we can continue tracking the Parker Lake population!