The end of last week marked the halfway point for our weeks of guests.  So we thought it’d be a good time to check in on our big fish stats and see how they look.  What we found is impressive.  There are a lot of numbers on this chart, so you may want to click on it for a bigger view. 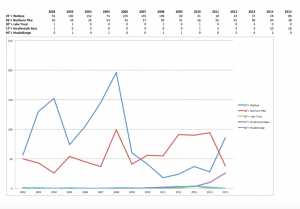 So far halfway through the 2015 season, we have already exceeded our numbers of big walleye from the entire 2014 season!   So, what does that mean?  If we sustain this pace we’ll end up with more 25+” walleye this year than any season of our tenure as lodge owners.  That’s a great indicator that the lake could by cycling back up toward the boom year experienced in 2008.

Northern pike numbers look like they are down, but the majority of our guests haven’t been targeting them.  We get a couple big groups near the end of the season that exclusively target pike that will bring those numbers back to normal levels.

Smallmouth bass numbers have been terrific as well.  We’re on pace to see 250+ smallmouth bass out of Parker Lake including 26 fish at or above 17″.  We’ll keep tabs on the numbers the rest of the way, but we’ll also be looking to the 2016 season to see if the cycle continues to improve.  You may want to start making plans to be here in 2016!