Red Lake Fire #3 is still burning in the Woodland Caribou Provincial Park.  The fire is still not listed as under control by the Ministry of Natural Resources, but it is growing at a much smaller pace.  It has burned over 212,000 acres which is over 312 square miles!  The scope of the fire is still mind boggling when you think about it.  We have been very fortunate in suffering no days of ash or heavy smoke.  Smoke from the fire has been visible though as you can see below.

Smoke rises from the southwest corner of Martin Bay. 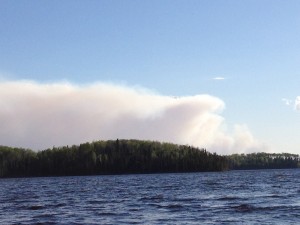 Smoke was heavy enough on Parker one day to blot out the sun. 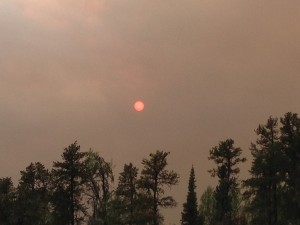 Clouds are up high, but heavy smoke drifting down the west side of Parker is lower. 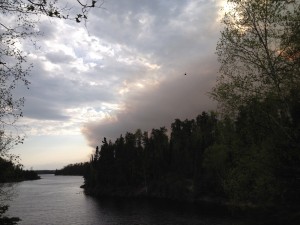 The closest part of the fire is about 25 miles away from the lodge so at this point we still have a pretty good buffer zone.  A couple people have asked about the risk of evacuation or trip cancellation and right now we’d say that possibility seems low.  If the dry weather had continued that may have been cause for worry, but thankfully we are getting plenty of rain this week which will buoy fire fighting efforts. 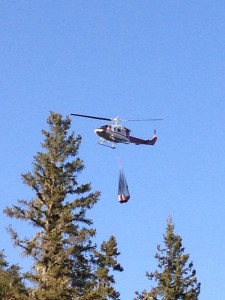 There is a pretty steady stream of helicopter traffic overhead as well.  This one is ferrying supplies to the firefighters.  There is still a restriction on open fires in the Red Lake area so any shore lunches will need to use the propane cookers.  We’ll continue to monitor the status of this fire and keep you posted on any changes.

In other news, the first group has arrived!  They are spending the first full day, albeit rainy, on the water.  We’ll let you know how they do soon!