The Ministry of Natural Resources (MNR) provided some preliminary results from the Broadscale Monitoring (net survey) that occurred in August 2014.  We are patiently waiting for more detailed information to be released at a later date on other species, but the initial look at the walleye population in Red Lake provided some great news!

Some highlights of the report: 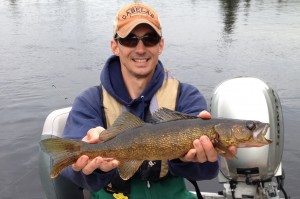 This is a picture of a 20″ walleye I released on Parker the day before we left this fall.

Fish from 19 out of 20 year classes were captured and strong populations of fish up to 20″ were identified.  We are optimistic that our policy of releasing all walleye caught over 18″ will continue to contribute to the 20″-30″ population.  Some fish in the survey were reportedly 20 years old!