You might remember we finished last season with some impressive smallmouth bass numbers.  This season continues to show an improvement on the smallmouth front.  Since we are just past the halfway point in the season we decided to check and see what the pace looks like for this year.

So far this season anglers have released 45 smallmouth bass measuring at least 15″.  We have seen 15 fish measuring at least 17″ putting us on pace to edge out last season’s numbers.  We added the 15″ minimum to the catch and release board this season since it was getting a bit lengthy with all of the smallmouth catches so we won’t have a total for the season, but we will definitely top last season’s mark of 178.

This 19.25″ smallmouth caught by Phil is tied for 2nd on the season leader list. 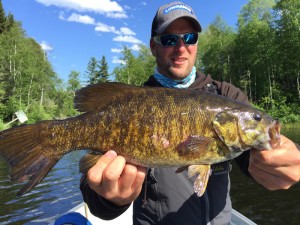 The other interesting thing is we are seeing more smallmouth bass caught on Red Lake.  Last week Noah and Mike boated six of them all on Red Lake.  That is the most that we are aware of on Red for the week.  Phil and Don boated 26 smallmouth in one day on Parker during their trip.  The amazing thing about that was they fished Red Lake between breakfast and dinner!  That means they caught 26 smallmouth fishing a couple hours before breakfast and a couple hours after dinner on Parker!

Smallmouth bass love the cover afforded by the numerous rock reefs and boulders on Parker.  Anglers have had plenty of success targeting the rock piles marked with the large oil jugs such as this one.

Pitching jigs, tubes, Rat-L-Traps, and various crankbaits on top and around the reefs has worked well.  Many smallmouth like to hang around the edges of the structure.  Plenty of people have caught them casting pike baits and trolling lindy rigs too.  We’ll see how the rest of the season pans out and if anyone can top the 19.5″ mark!