Ben with a smallmouth last season 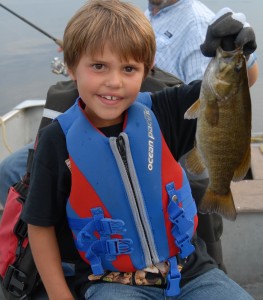 So far in 2015 we have caught and released 55 smallmouth bass and it’s only the 3rd week of the season!  That puts us on pace to nearly triple last year’s total!  Guests are catching some nice ones too.  We’ve already had five fish between 18.5″-19.25″.  Last year included a couple of 20″ fish so it’s only a matter of time before someone tops that.

These smallmouths are healthy too.  They are absolute footballs and it’s tough to get your hand around their back they are so thick.  Fortunately they are one of the few fish you can actually grip by the lip here.

Smallmouths have been hitting jigs, Rat-L-Traps, and other Rapala crankbaits similar to Husky Jerks.  You’ll know when one hits because it won’t be like any other fish you catch.  They love to tail-walk across the water, dive to the bottom, make a big run, and I’ve even had them run into the bottom of the boat.   Pound for pound they are the hardest fighting fish you will catch.

There is still a bit of a negative connotation concerning smallmouths.  A perpetual myth is that they hurt walleye populations.  All of the studies we have read indicate this only happens on lakes that are overstocked and/or suffer from inadequate forage.  Parker Lake does not fall in these categories so we are confident the lake can thrive as an excellent fishery for walleye, northern pike, and smallmouth bass.  We are still seeing excellent numbers of walleye and northern pike caught on Parker as well.  This is something we’ll continue to monitor as we now have our own study unfolding right in the backyard.

If you have yet to make the trip up this summer, you’ll have a crack at the Holy Grail of smallmouth fishing – a 20″+ fish!