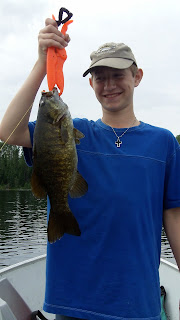 Time for another fishing update. The last couple weeks have yielded some terrific fish. Congratulations to Jared Oehrke for a surprising 18″ 3 lb. smallmouth caught on Parker! Smallmouth are a rare catch so that makes this fish one to remember. Also congratulations to Dennis Meyer for his monstrous 29.5″ walleye.

Slate Bay was a go-to bay last week for the guests and Martin produced well when the wind was blowing. Parker Lake was absolutely on fire on Thursday last week which provided a great end to the week. The low point came when a guest lost a new fishing rod on Parker, but another guest managed to snag it later in the week!

The Northern Lights were visible quite clearly last night. It looks like we’re going to weather a bit of rain early this week, but so far rain levels are much lower than last year which is nice. Until next time!