Several guests have been ticketed or warned for speeding on highway 105 on the way to or from Red Lake this season.  The speed limit on the highways in Canada is only 80 kilometers an hour which equates to about 50 miles an hour.  This feels excruciatingly slow when you are used to limits of 55 to 65 miles an hour in the states.  There are far fewer roads in Canada though, so it is much easier for the Ontario Provincial Police to setup speed traps. 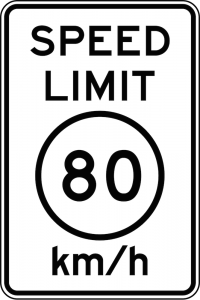 Guests that asked have been told the police only tolerate about 10 kilometers an hour over the limit (about 6 miles per hour) before pulling a vehicle over so it just isn’t worth it to speed.  Red Lake is about 250 miles from the border so plan on a five hour drive if you lock in at the speed limit.

We have also been informed that radar detectors are frowned upon in Canada so plan to turn yours off or leave it at home.  Hopefully this warning will save someone from a ticket and seeing those flashing lights in the rearview mirror!