Topwater trolling is certainly an unconventional, yet highly effective, technique for catching Northern Pike.  First and foremost I love casting for Northern Pike and I still spend most of my Pike time slinging lures across the water.  However, casting all day can be tiresome and this technique provides a much needed rest for achy shoulders and arms.

Others may be using this tactic, but I’ll give the credit to my brother Carson for perfecting it.  When he suggested it for the first time I was fairly skeptical, but after trying it several times the last couple years I’m convinced it works.  His lure of choice is a Zara Spook and he forward trolls the boat slightly faster than idle speed.  He lets out 60-80 feet of line and twitches his wrist and lightly pops the rod tip causing the lure to bob back and forth to achieve an exaggerated “Walk the Dog” lure motion.  I quickly found the two things you can do wrong is to leave too much slack in line and not pop the lure in a consistent pattern.  That will result in plenty of missed strikes. 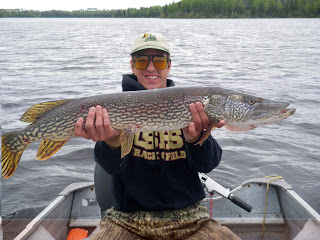