You just had to click on the post after the graphic picture warning didn’t you?  I don’t think they are that bad, but Carrie says she has been having nightmares and wanted me to warn everyone.

This week we had an unusual catch.  The guys caught and released a 36″ Northern Pike with an abnormal growth on its abdomen.  We contacted the local biologist at the Ministry of Natural Resources (MNR) and he did some checking.  There are a couple of theories – one being a lymphosarcoma.  This is believed to be caused by a virus.  You can read more about that here on the Minnesota DNR page.

The biologist actually favored a second opinion of the growth being an epithelial papilloma.  An epi-what?  It’s basically a benign tumor with leaf-like projections above the skin.  We favor that prognosis as well considering the “honeycomb” appearance of the growth.  Lymphosarcomas definitely have more of a “cauliflower” appearance.  So why is it red?  The biologist says it could be vascular to give it a red appearance.

So now you’re worried the fish you will catch up here have viruses and tumors.  Don’t be.  This is a super rare occurrence.  I have seen lymphosarcomas only twice on a fish in 20 years.  And if this fish does indeed have an epithelial papilloma then it’s the first one we have seen.  It’s so rare that the Ministry of Natural Resources asked us, which means you, to bring the fish in if you catch one like this and it is of legal size (not in the slot) so they can positively identify it.

You can see how big this growth is a 36″ fish, wrapping around the belly of the fish. 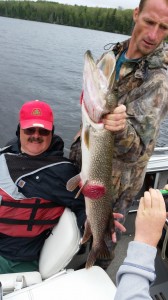 A close-up of the growth. 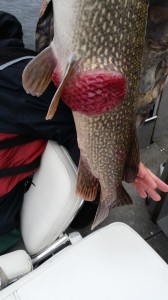