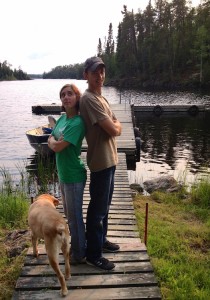 (I’m all the way up on my tip-toes in this pictures and I am still uber short.  Sigh.)

Here’s the deal.  Travis’ brain runs a mile a minute and occasionally he shares a real gem with me.  It takes my normal human brain a few seconds to catch up because I am trying to back pedal to figure out how in the heck his brain works.

A little back story for you:

Last fall one of the dock pins out on the end of the Parker Lake dock came loose and fell out.  Straight to the bottom of the lake.  It happened just a few days before we were leaving so we put a giant metal carabiner in there and called it good enough.  When we arrived this spring, we started rethinking this strategy and added “giant dock pin” to the town list.  Ah, but alas, it was not meant to be because we could not find a single dock pin in town. ANYWHERE.  Weird, right?

So we settled on a giant nut and bolt and called it good enough.  Two days go by and the bolt is gone!  What?  This is maddening!!  Back to the drawing board.  In the meantime we bought a second giant bolt with TWO nuts and Travis’ brain went to work.  A few days later we are doing dishes and he unveils his plan:  Order a super magnet off the internet to suck up the original dock pin.  Boom.  Problem solved.

To say I am skeptical is……fair.  I start questioning his magnet plan.  I am convinced that after that dock pin has been on the lake bottom for an entire winter it had to have gotten sucked under the mud and gunk and there is NO WAY a magnet (a magnet?!) is going to pull it up out of the muck.  I also quickly give him a cap on how much can be invested in said magnet.  And since each of us are, how you say, competitive, I can see where this is going.

“I’ll bet you $100 that magnet doesn’t work!”
Travis quickly reminds me that I can’t bet him money because my money is his money so it doesn’t count.

We shake on it, magnet gets ordered, and it has now been received.  But who was right?  Check back in to find out what happened!