So a few posts back we listed some of the crazy numbers associated with the 2012 season (read that post here), one of which had to do with some certain dinner guests.  From Scotland.  For real.

I thought I would fill in the details that you have been anxiously awaiting since we left that little teaser of sharing more about this event.

In early August (think Olympics, pre-presidential campaign overload, and lazy days of summer) we received a phone call at the lodge.  It was Lucy from the propane shop in town who we have talked to a few times, but it was still a little surprising to be getting a phone call from her.  She is from Scotland, but has been in Red Lake for a while and married a Canadian.  Travis happened to answer the phone that day and this is what I overhead from their conversation:

Travis:  “How are you?  Yes, the summer is really flying by”….yadda yadda…..
(Lucy’s response)

Travis:  “We would love to have you and your relatives out for dinner.  It would be no problem.”
(Lucy talking some more)

Travis:  “When are they visiting?
(Lucy’s response)

Travis:  “Oh, mid-September. Well, that should be fine.  Just let us know all the details the week before.  We are looking forward to it.”

Now, I’d like to think I am a very reasonable and pleasant person.  BUT!  I think it was fair to jump to the conclusion that my husband had just invited a somewhat large number of people (read: strangers) to dinner after our season was over when we would be trying to close up camp, right?  At this point I must apologize to Travis for the initial reaction I had following the above phone conversation.

Travis, being the good looking and good natured fellow he is, was super excited at the opportunity to host some Scottish visitors.  I mean how often does this situation fall into your lap?  Probably never.

Okay, so it DID sound kind of fun.

Fast forward to mid-September.  We heard from Lucy again about the dinner and learned there would be 8 dinner guests coming to the lodge.  Travis suggested we make the beef brisket, which is quickly becoming our guests’ favorite meal.  Sounded good to me.  Well, not really.  It was hard for any of the meals I had just prepared for 15 weeks in a row to make my mouth water, but it sounded like a good idea that others would most likely enjoy.

On the day we expected our guests it was fairly cool and cloudy, with wind gusts over 30 miles an hour.  Due to the wind, boat travel plans had changed for Lucy and she asked if we could come get them in our barge.  The barge is great for transporting large groups of people across the water.  It is also a WIND MAGNET.  But, alas, the brisket was in its 12th hour (literally) and there was no turning back.  Travis and his dad headed over to town to pick them up.  Apparently at the landing in town where we pick up guests Travis was battling wind as he was backing up and turning the barge around to head back to camp.  He missed another docked boat by inches.  INCHES!  Someone was extremely impressed and told him, “Man, you must really know your boat!”  I’m sure Travis was sweating bullets and thanking his lucky stars at his near miss.  Always an adventure, I tell you what.

Everyone made it safe and sound and their somewhat “bumpy ride” didn’t phase them one bit.  I guess being from Scotland helped.  We introduced ourselves and gave everyone a quick tour of the camp and had a great meal.  They brought the wine and super fun accents and we had plenty of food and our beautiful view of Parker lake.  It was such a fun evening (this is where Travis says “I told you so!”)  and before we knew it was time to head back to town before it was totally dark.

We did get a group picture before they left for proof! 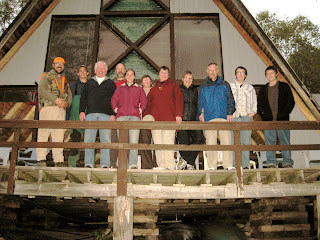 Lucy was so thankful and sweet.  I think they had a genuinely great time and many of her relatives had never been to Red Lake before!  Who knows, maybe we will become the hip dinner spot for Red Lake – locals and visitors alike.  If so we are going to have to teach Cosmo to wait some tables.

I’m sure some of you are preparing for dinner guests of your own as we head into Thanksgiving week.  Anyone hosting out of towners?  Or, better yet, friends and family from out of the county?  If so, best of luck!