Cosmo resumed his post as camp defender and has already been put to the test!

Last week before our guests arrived we had a visitor of sorts.  Travis and I were outside the main lodge working on something in early evening.  Cosmo was loungingaround as per usual when all of a sudden his ears perked up.  He looked over towards the big cabin, and instinctively so did Travis and I.  Just past the tree line there was what can only be described as a MASSIVE wolf.  If you have every seen one you know what I’m talking about.  They are enormous and make Cosmo look like a tiny lap dog.

It takes your brain a split second to realize what its seeing.  Normally if this was a black bear it would be no big deal for the most part.  They don’t tend to be aggressive and all it would take is someone or something making a loud noise and it would scamper off.  (Please note: this is NOT the case if there is a cub present.  You should never try to upset or feed or call any type of bear/moose/wolf/etc.)

So once Travis and I realized it was a wolf we panicked.  By this point Cosmo was halfway to the big cabin and the wolf had turned and was running back into the woods.  With Cosmo chasing right after.  Just to clarify, wolf vs Cosmo is NOT a fair fight.  A wolf is possibly the most dangerous species of wildlife up here.  They can be very mean and have lots of teeth.  They are also very fast and can swim.  And hang out in packs.  So yeah, not super pleased to be watching the puppy boy chasing the big bad wolf.

Travis and I frantically called after Cosmo, and were listening for what was coming next.  We didn’t think it could be good.  We could hear trees breaking in the woods and my heart had pretty much stopped.  Travis started to run into the woods after Cosmo, yelling for him to come back.  And you know what?  He did!  We could’t believe it!  After what felt like eternity (but was probably only like 45 seconds) Cosmo came bounding back into camp.  Hair raised and looking totally freaked out.  What did he see back there?  Where did the wolf go?  How were we so lucky?  Did Cosmo learn his lesson – that wolves are absolutely not to be messed with?  We can only hope.

That night we tucked him in his bed extra tight, gave him an extra long snuggle, and thanked our lucky stars to have a safe puppy boy.

The next day we found this on the far side of the big cabin: 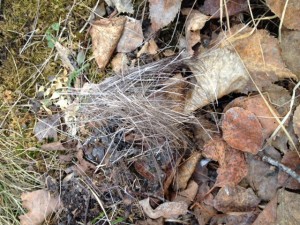 A tuft of wolf hair!  It has been bagged and tagged and submitted to the evidence room 🙂  Let Wolf Watch 2014 commence.  I am officially obsessed.