Coming to the lodge late in the season has pros and cons.  We’ll get into that later.  The purpose of this post is to inform you of an addition to the con list, which is the growing live bait shortage in Red Lake.  We already informed you about the leech shortage here.  Now the bait shortage has grown to include night crawlers and large minnows.  The only live bait we expect to be available for the last three weeks of the season are small minnows which run about $5.00 per dozen with tax included. 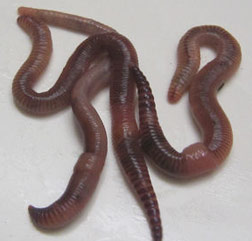 If you plan to use night crawlers during an upcoming trip this season, you’ll need to bring them with you.

The good news is you can bring night crawlers across the border as long as they are in bedding/newspaper and not soil or dirt.  Also, we checked and the night crawlers that come from Fleet Farm in Peat Moss are acceptable to transport across the border.  You can also check in Fort Frances and Dryden for leeches & large minnows, but from what we’ve heard I would not have high hopes of finding bait in those towns either.