I’d safely wager most of you remember the boat naming contest from 2015.  Look for more info on that in August (definite foreshadowing!)  Anyway, we spouted off a list of the fleet boat names in the run-up to the naming contest.  But we didn’t tell you much about any of the boats.  So we thought it would be fun to introduce you to a few of them.  Meet Crimson Echo – the crown jewel of the Parker Lake fleet. 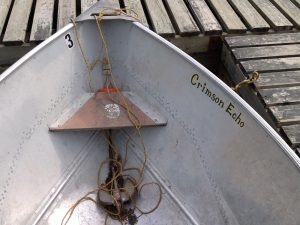 Believe it or not – Crimson Echo was the best boat in the water when we took over in 2009.  At that time she was moored over on Red Lake.  After we started purchasing all of the Lund SSV boats we moved her over to Parker Lake in 2011 so she’s celebrating her 5th anniversary on the lake.

What does the name Crimson Echo mean?  Travis’ sister Mercer came up with the name so we asked her.  “Nothing – I just thought of it,” she says.  “I liked the sound of it.  It’s majestic.”

Hmm, ok.  But it has to mean something right?  Maybe there’s something subconscious working.  A quick Google search didn’t turn up much.  The phrase “Crimson Echoes” was a part of the name of a video game for Super Nintendo and Crimson Echo is the name of a Christian rock band from Louisiana currently on hiatus.  Maybe it doesn’t mean anything…

One of the reasons Crimson Echo is a guest favorite is the power tilt motor on the back.  This adds a bit of weight, but she makes up the speed with a sleek 3-blade aluminum prop.

Crimson Echo has displayed some excellent smallmouth mojo this season.  Here is Sarah with a 16.5″ fish. 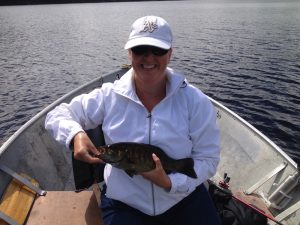 Here is Travis with his biggest smallmouth of the season so far – 17″.  You can’t see the Crimson Echo name in the background, but the giveaway is the split rear seat.  You either love it or hate it, but most people seem to be fans.  This is the only boat in the fleet with a split rear seat which creates a little extra space in the back.

Action shot – Crimson Echo getting a workout with four anglers aboard and Mercer as captain! 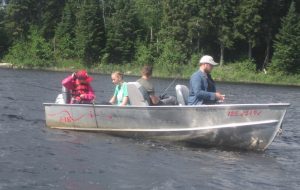 Did you take Crimson Echo out for a spin this summer?  Let us know what you thought.  We’ll introduce a few more boats later this month.