It is suuuuuuper hot here today.  And humid.  And sunny.  Did I mention it was hot?

I travel many miles to avoid this type of summer weather.  I thought mother nature and I had a deal.  Looks like it may stick around for a few days too.  Yuck!  I predict it will be miserable for the next few days, then it will be pleasant and perfect for a split second, and then it will move right onto freezing.  I’ll be begging for warmth by the end of next week.  Oh Canada.

This is where Travis and my mama would tell you I have a tendency to be a bit dramatic in my predictions, and dramatic in general actually.

But!  The weather has nothing to do with the title of this post.

In last week’s post we shared an awesome picture of a lake trout caught and released on Red Lake.  Caught by accident while trolling for northern.  With a GIANT stick bait called a “grandma”.  We all found it a bit odd that a grandma lure would bring in a lake trout.  Its definitely not something the guys fishing last week are used to seeing with that method of trolling.  Well, Tate’s 33″ lake trout was just the first!  We had two more really nice and healthy looking lake trout caught last week on grandma lures after Tate caught his.  Take a look: 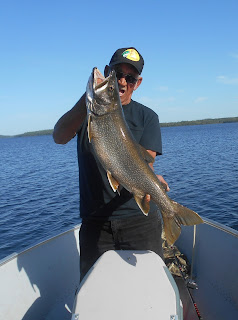 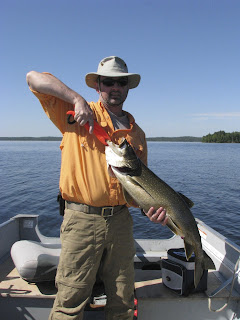 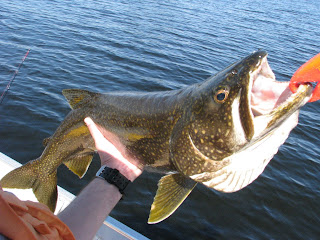 What an awesome fish!
Please remember that lake trout are catch and release only on Red Lake, and if you are specifically fishing for them you must use a single barbless hook with no live bait.   They tend to like deeper water depths and are mostly found on the west end of Red Lake.  I’ve never even seen one outside of pictures!  They aren’t a dime a dozen, but I think we can all agree there are some nice ones in Red Lake.
Side note:  As great as this post title is, wouldn’t it have been better if it was MY grandma catching a lake trout using a grandma lure?  Gran and Grandma, we may just have to spend some more time on Red Lake next summer jigging for lakers.  Just for fun here is a picture from well before my Eagle Falls Lodge days of me with my gran and grandma. 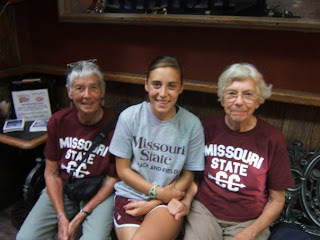 I come from good people, I tell ya!
Tomorrow is Monday, which means…. Fish Fry!   Be jealous.