Well the good news is I lived to tell this tale. 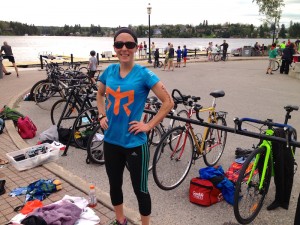 So for that, mother nature, we thank you.

It wasn’t exactly smooth sailing for me to make it to this starting line.  For those playing along closely at home you might recall that I suffered a torn tendon in my right foot this winter which took my running from 90 to zero.  Just. Like. That.  And for those of you who know me as a human, like even a little bit, know what this means.  It means dark days my friends.  I spent 5 months attempting to heal my foot.  It took patience and rest and a fair amount of angst.

When we headed up to Canada in May I packed my running shoes right along with my walking boot.  And to be honest, I was ready to log more miles in the walking boot than in my running shoes.  I had given myself the goal of trying to start running on my birthday.  Until then, rest.  With “rest” being work 14-18 hour days, seven days a week, with the majority of those up on your feet and moving.  Not exactly ideal healing conditions for this banged up runner.  I’d be lying if I said I didn’t lose hope.  My foot was tender and sore feeling by the end of most days.  I NEEDED to have running back in my life, but everything I knew about this type of injury told me to wait.  Running is my therapy; it is when I feel like my best version of myself.  Always has been.  I had resorted to icing it on a daily basis, just to get 15 minutes of bliss each day.

My birthday fell on a Sunday, so on that following Tuesday town trip I treated myself to my first running attempt of the summer.  15 minutes easy.  You know those memes on the internet that have 2 pictures side-by-side with one captioned “what I think I look like running” and the other “what I actually look like running” with appropriately paired images?  Well, I know what I looked like on that 15 minute run.  I probably looked fairly normal.  But on the inside I was like a little kid with a giant smile on my face waving my hands up in the air like a maniac, as if to say “THIS IS THE BEST THING EVER!!!!”  And so it began.  Slowly.  I started running once, twice a week.  Short, easy runs, which quickly became the highlight of my week.  I continued to ice my foot.  During our “off” week in early July my foot didn’t feel tender for one second.  Because I wasn’t on my feet all day! This gave me hope.

With some of the warmer weather we had in July and early August, I increased my swimming attempts.  (Sidenote: Someone needs to teach me to swim for real, stat.  It is by far my weakest event.  More on that in a moment.)  Travis asked me one day if I was going to do the triathlon.  I hadn’t really even given it a thought.  I am the kind of person that doesn’t sign up for a race unless I am race ready.  Well guess what, the last time I felt race ready was about 2.5 seconds before I was completely injured in January.  But I set aside whatever pride and competitive nature I inherently carry and decided to sign up again for the sprint distance.  A sprint distance in this situation was a 750m-ish swim, a 20k-ish bike, and a 5k-ish run.

Going into this weekend, we had some sweltering hot days.  Sticky hot and humid, with temperatures threatening 90 degrees.  Not ideal for this uber sweaty girl.  However, a mega cold front rolled in last night along with some 20+ miles per hour wind and rain.  All I could do is shrug off that forecast and laugh.

As I went to bed last night drenched in sweat and listening to the sound of rain and thunder I was trying to convince myself that this whole triathlon thing was a good idea.  I was doing it because it would be fun, right? Don’t get me wrong, I am all about testing my limits and trying to embrace things outside of my comfort zone but you have to remember that I had a 5 mile boat ride first thing in the morning across some questionable weather conditions just to even make it to the start line… 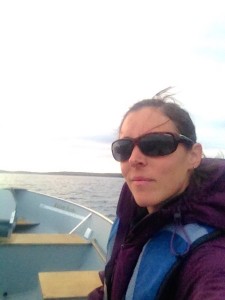 The wind at this point wasn’t terrible. Yay!  Feeling better about the whole thing and the MUCH cooler temperatures.

Here is the dock where the swim portion started.  If you look closely, you can see a float plane out in the middle of the bay.  We had to swim in a triangle and tag 2 planes before returning to the dock.  The lake looks deceptively calm in this picture: 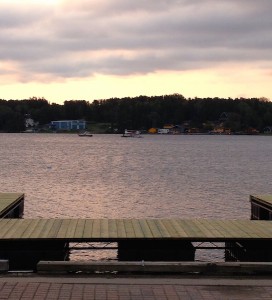 If you read my post from my first Red Lake triathlon, you might remember that I faced some extra cold temperatures that day.  (You can find that post here.) Not the case this morning.  The hot weather from the last week or so made for a very pleasant swim, temperature wise.  However, the wind gusts and white caps that were present this morning created a bonus challenge.  To say I swallowed a fair amount of lake water is an understatement. I don’t claim to be a great swimmer, but I am a competent one and this was BAD.  I tend to have a bit of trouble swimming in straight line anyways, and when you add in some mega waves it just adds to that problem.  It was CRAZY!  I’ve never done this type of extended swimming out in an ocean, so I can’t speak from experience, but I’m wondering if what I did this morning is even a little bit on the same page.  It was nuts.  No idea what my time was for the swim, but I don’t think it was anything to write home about.

Here is my transition station: 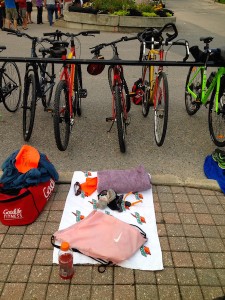 I went the minimal route this time around.  Last time I swam in just a sports bra and undies (which was hilarious because EVERYONE else looked very professional aka prepared in their wetsuits) and I had to try and pull on running tights over my wet frozen legs after the swim.  This time around I just swam in my tights.  This made for a MUCH faster transition with less changing required.  I just had to ditch my swim cap and goggles, pull on my socks and shoes, grab my watch and shirt, take a swig of gatorade, and put on my helmet.

Like last time, Sherry from the marina let me borrow her bike and helmet (thanks, Sherry!).  And again, like last time, said bike didn’t exactly shift.  So whatever gear I was in was what I had.  I must believe that if I had better gear for this leg of the race I could go into beast mode.  However, beggars can’t be choosers, and outside of zero shift power I had no issues with bike mechanics, etc. so that was good.  But the helmet, however.  Hmmmmm.  I knew I was in trouble when I had biked about .25 miles and I felt like I was choking.  I tried to shift it forward or backwards to get a more comfortable fit, but I was a little afraid of it then being too loose.  I decided to leave it in the choking position with the hope that it would at least keep my brain from squirting out on the pavement if I went down.  Now, the bike portion is nothing to sneeze at.  It is hilly pretty much all the way to the turn around.  And on this particular occasion, those uphills were accompanied with some nice 20 mph winds – right in the face.  Booyah!

Here is a shot of my bike and one of my fellow competitor’s bikes.  Can you guess which one was mine? 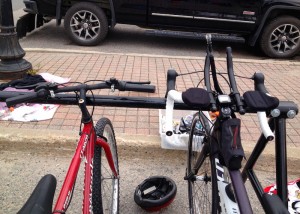 To say I was happy to ditch the bike is an understatement.  I was finally on the leg of this race where I feel most comfortable.  It really is incredible how much like jelly your legs feel when you hop off the bike and go right into a run like this, though.  Pure jelly.  I was a little more conscious of my foot than I typically am in a race situation, but that was to be expected.  The run is definitely my strongest event.  I was able to catch several people during the run.  The wind was still rocking during the entire run.  Ridiculously windy, I tell you.  It was like I was back in the corn fields of Illinois during the dead of winter.

All in all, a good race!  I have no idea what my total time was, but I think I was 4th overall for the women’s sprint distance.  The field was stacked, I tell ya.  Please, anyone and everyone, the next time I decide to sign up for something like this tell me to invest in some proper gear.  Shake me by the shoulders if necessary.  I really do like this triathlon business, but it would be nice to see how I do with the proper set up.  Oh, and training.  Training would help!  Anyone out there have recommendations for my next race?

After the race I treated myself to a cup of coffee at Tim Horton’s.  Yay! 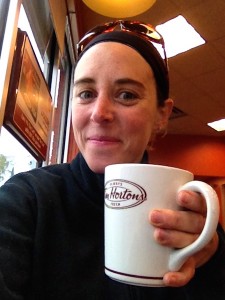 The sea was angry on the way back to the lodge.  Quite possibly the worse solo boat ride I’ve been on yet up here.  I looked like a drowned rat by the time I got back, and it wasn’t raining.  The wind and spray from the water had pretty much left me soaked.  All in a days work.