Good afternoon to all! 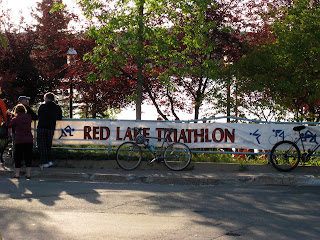 Some of you who have been up more recently may have heard me talking about the Red Lake Triathlon.  They had the 23rd annual Red Lake Triathlon last Sunday morning and I am proud to say that I took part in it.  This was definitely a new type of competition for me and one that I was not quite adequately prepared for.  I have been running a little more regularly this summer (more for my sanity than anything else) and I managed to do a few practice swims before the event, but other than that I was the farthest thing from prepared.
Sherry from the Marina has been on my case the last few summers about competing in the triathlon and I had successfully avoided it with telling her I couldn’t just leave the lodge to do the event – we all know I make better breakfast than Travis (ha!).  But alas, I could actually swing it this summer so I figured what the heck.  I plunked my $30 down and bravely signed up.  I was at least smart enough to register for the “sprint distance” which consisted of a 750m swim, 20km bike ride, and a 5km run.  Sherry was nice enough to lend me her bike and her helmet and I met her at her house a few weeks before the triathlon to adjust my seat and helmet.  So I should be good to go on the biking portion, right?
When Carson, Travis’ brother, was up here he helped me measure the swim distance on Parker from a boat while holding a hand-held GPS.  FYI – if you swim to the point and back you’ve done about a 1/2 mile or around the 750m necessary for my race.  Donny Aiken, who owns the marina, let me borrow his daughter’s pink swim goggles so I could at least swim in the right direction on race day.   Luckily I had my own running shoes and gear and I definitely felt most confident about the run portion of the race.  I come from a running background and was pretty sure I could at least finish the 5km run, now whether it would be pretty or not was still in question.
I feel it is important to share that when I was doing this practice swimming and when I signed up for the race it was consistently in the 80’s during the day with water surface temperature hitting over 70 degrees.  Care to guess what the temperature was the few days leading up to the race?  Mid 50’s with low 40’s at night.  Yikes!
So there I was on Saturday evening getting everything packed and ready for the following morning, race day.  Anyone who knows me well knows that the first and MOST important thing to pack is snacks.  I don’t like to be cold or wet either, but if I am hungry – watch out!  Snacks get packed, every combination of bike/run outfit gets packed, water bottle is packed, goggles, extra socks, shoes, you get the picture.  Looks like I am getting ready to leave for three whole days.  I double check everything and I decide maybe I should google “triathlon tips” since I have never done anything like this before.  Let me just say: WORST. IDEA. EVER.  I quickly wasted 30 minutes peeling through websites, forums, etc. and learned how much training is recommended, the gear you should have (which I most certainly did not have), and how to set up and manage your transition station.  Transition station?  What the heck is that?  I’ll tell you what it is, something that had not even crossed my mind.  Insta-panic for Carrie.  I called Travis back to our room when I had reached full potential meltdown mode.  He knows this look quite well, unfortunately.  Like always, he knew what to say and not say and tried to kindly suggest that the Red Lake triathlon was probably fairly low key and that I had zero pressure to do well or do it at all.  I signed up for this because I wanted to do something fun, right?  So I headed to bed feeling better about everything and refocused on how cold it would probably be the next morning.
I woke up at 6am to get dressed and had my one cup of coffee with two slices of peanut butter toast and a banana.  So far so good.  Travis got up to walk me down to the dock and it was definitely chilly.  First time I have ever had to take a boat to get to a race!  I told him if I wasn’t back by noon to start getting concerned.  The boat ride was awesome, very rarely do I get out on the water this early in the day.  The steam on the water looked so cool and to be the only one out there was just super peaceful.  Definitely helped me to calm my mind and my jitters. 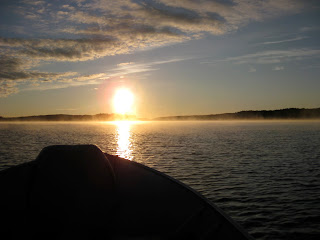 I picked up my borrowed bike and headed to the check in on Howey Street by the public access docks.  I quickly realized that it was pretty low key (Travis is right, yet again) and found a place for my bike. 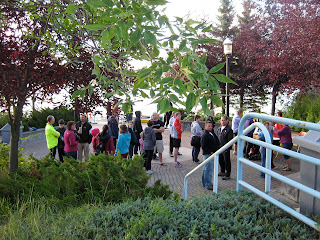 One of the most fun parts for me was getting my swim cap and my numbers marked on both arms and legs.  I felt very official. 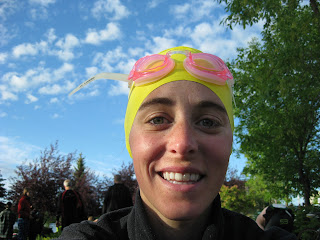 Once I got that taken care of I set up my transition station and started to survey the competition.  See the girl in the picture below?  I could tell she was legit – and I think she ended up getting 2nd place.  She was strictly business, like jumping in the water and warming up for the swim business. 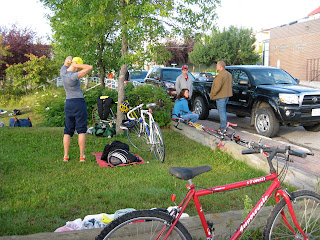 I was starting to notice that probably half the field had wet suits on.  Seemed like a good idea, since we were all getting ready to swim a fair distance in some cooler temperatures.  I’m tough though, right?  I was also noticing that the rest of the field had legitimate swim suits on, the kind you see on people who can swim laps with proper stroke form.  As we got to the starting line (where you had the choice to start in or out of the water, I chose out) I realized that I was the ONLY person with neither a wet suit or actual swimming swim suit on.  I had settled on sports bra and undies that could pass as swim bottoms, mostly for their increased probability of staying put when entering and exiting the water.  Yea, this is what I had to work with people. 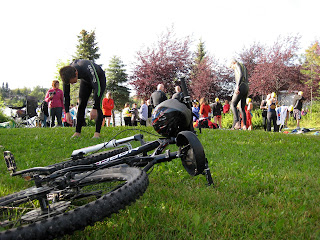 Unfortunately I didn’t get pictures of anything during the race, but here is a quick recap for you.
Swimming:  I felt like I did pretty well.  I was probably in the back half, but I felt comfortable about my pace the entire time.  I never felt like I was super fatigued or at risk of drowning.  It was neat because they had 2 float-planes set up in Howey Bay and you had to swim to each and then back to the dock, sort of like a triangle shaped swim course.  I’d say about half way through my hands and feet were completely numb.  When I got out of the water and on the dock it was challenging to get to my bike and get changed for the rest of the race.  Partially because everything was wet (picture me trying to put on running tights when my legs are dripping with water and my hands and legs are totally numb) and partially because my mobility was limited due to the cold.  I’m sure my transition time was pretty poor, but I had no idea what to expect. 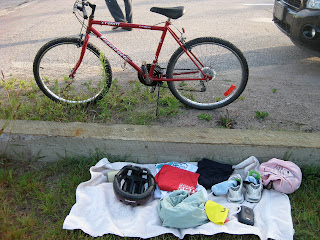 Biking:  This was maybe the toughest part.  I was nervous about being cold (which I wasn’t) and I was nervous about the borrowed bike being up to snuff (which it probably wasn’t).  It wouldn’t change gears very well, so I just tried to keep it in a fairly low gear so I could make it up the hills.  Speaking of hills, there was a MONSTER hill right before the turn around.  I was trying to gage my position overall for females and was probably in 8-10th place during the bike portion.  Some of these may have been on teams, I wasn’t really sure.  The girl I talked about it the picture above, yeah – she was WAY ahead of me.  This portion of the race was when I sort of realized that my inexperience was making it pretty much impossible for me to win or place in the top three, so I sort of decided to just have fun and enjoy the rest of the race.  Oh, I also had a super sore bum from the bike seat, like from the minute I started.
Running:  I was surprised how much my legs felt like jello after getting off the bike.  It probably took about half of the run for me to get my legs back.  I did pass about 4 females on the run, so I think I finished in the top 5 or so.  I really enjoyed the run, I was pretty tired so I never felt like I reached “race pace” but that was fine.  It was super fun to finish strong in my strongest event out of the three.  I really do love to run, and it made me excited to get back home and do some more serious training this fall.
Right after I finished one of the race officials came up to ask me my name.  Turns out they had my race number down wrong, so they didn’t get my swim time.  Kind of a bummer.  They did get my total time which was 1:40:something.  Not bad, huh?  I don’t know how many females competed in the sprint distance, but I think there were about 50 people total.  I wasn’t able to go to the awards/wrap up event because I had to get back to the lodge, but it was fun to see and meet a different crowd from Red Lake.  I will definitely be doing another triathlon in the future, hopefully with a little more training under my belt. 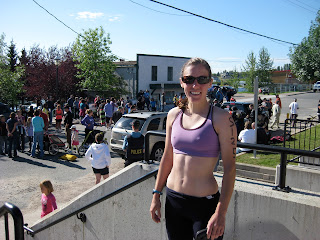 Anyone else tackling new adventures out there?  If so, more power to ya!
Carrie