You might remember two years ago Carrie competed in her first triathlon here in Red Lake.  She detailed her adventure here.  This year Eagle Falls Lodge had a new representative entered in the event and no, it wasn’t Cosmo.

This was the 25th annual race and it was commemorated with some sweet jackets. 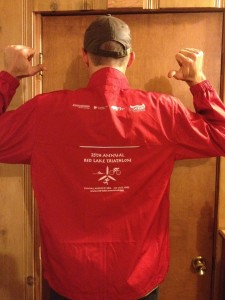 That’s right, yours truly stepped up to the plate this year.  Doing a triathlon has been on my bucket list for some time now and I decided what better time than now.  There were only a few obstacles to overcome.

The Swim
I wisely chose the sprint distance over the Olympic distance.  The sprint event is a 750 meter swim (about 1/2 mile), 20K bike (12.4 miles) and 5K run (3.1 miles).  You may be thinking “I don’t think I’ve ever seen Travis swim up there.”  Well you’d be right, until this year.  I overcame my very legitimate fear of giant fish eating me (hey, I’ve seen plenty of big fish that would have no problem snacking on one of my appendages) and started swimming 2-3 times per week off the Parker dock.  Fear is a great motivator to swim fast. I’ll admit it.  I did take advantage of putting in a practice session anytime there were kids in the water.  I mean, a giant Northern Pike is going to go for the smallest (read weakest) one in the pack right?

Preparing for a practice swim in style. 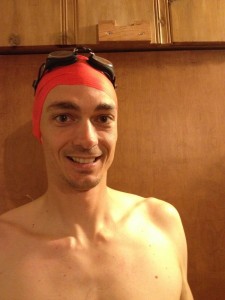 Well, I made it to race day and at 8am it’s a balmy 51 degrees.  The field is small with maybe 30 competitors and the dock is even smaller.  Much to my relief they order us into the water to start since there isn’t room on the dock for everyone to dive.  My dives frequently turn into belly flops, and getting the wind knocked out of you is not the ideal way to start a half-mile swim.  But my relief turns into mild concern (read PANIC) when I hit the five minute mark of treading water and we still haven’t started.  Turns out I’m not very buoyant and I’m working pretty hard to stay afloat.  I opt for the ‘clinging to the dock’ warmup instead. The gun goes off and I may or may not have been peeing in the water at the time.  Hey, there weren’t any port-a-potties!  We must swim to one float plane in Howey Bay, touch and swim to another float plane, touch and return to the dock.  The planes don’t look very far away standing on the dock, but I’m pretty wiped out and realize I’m not even halfway to the first plane.  I switch to the backstroke for some recovery.  The problem is I tend to lose my course and I hit a fellow competitor in the head (sorry goggle guy).  I stuck with my wonky freestyle the rest of the way.  “No, rescue boat, for the 11th time I’m ok, that’s just how I swim.” I manage to drag myself out of the water after 22 minutes in about 28th place (out of 30!)  It was looking like my American flag print Speedo was not the best choice of attire (just kidding, I didn’t really wear that).  Not great, but I was mainly pleased I hadn’t drowned at that point.

The Bike
I did not practice my transitions, but fortunately had some good advice from Carrie on what to expect.  I don’t know how much time I lost, but they went fairly smooth for a rookie.  I peeled off my ill-fitting cheap Wal-Mart goggles, laced up the running shoes, jumped on my borrowed mountain bike (Thanks to Sherry from the marina!), and donned my borrowed pink flower helmet.  Off I went tearing down Howey St. 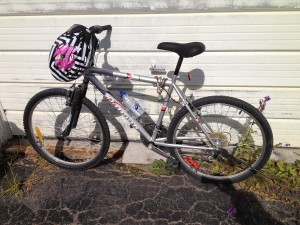 At this point I should probably mention I didn’t really practice any cycling.  It’s tough to do so anywhere at the lodge and finding the time to go cycling in town is usually out of the question.  I did manage one practice run before the big day (sorry, since I’m writing in Canada it should be practise). We biked down to Madsen and back to the government dock.  A few rolling hills, but nothing too severe.  My biggest trouble was suffering from Krameritis, or water stuck in my ears (Seinfeld anyone?).  The bike portion went as well as to be expected and I gained some valuable ground to set me up for the run.

The Run
This was the part I had been looking forward to the most.  Fortunately I have a pretty extensive running background.  Although I was only able to run 2-3 times a week, usually on a treadmill, I had confidence I could gut through the 5K run since that is what I know. I wasn’t adequately prepared for the rubbery legs feeling after getting off the bike.  It took about a mile to shake that out.  During my triathlon research I discovered “bricks” which is doing two of the events back to back to get your body used to the transition.  Unfortunately I had only done swimming and running bricks due to the lack of cycling opportunities.  And it’s just not the same as I found out.  However, my running experience paid off and I was able to catch several people.

That farmer’s tan doesn’t happen overnight.  It takes a lot of work people. 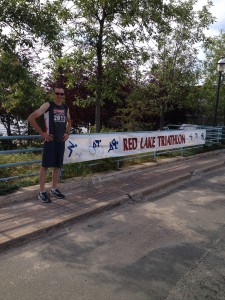 Surprisingly I finished 1st in the men’s individual sprint!  My total time was 1 hour, 38 minutes, and 35 seconds.  Getting a taste of my first triathlon definitely left me hungry to do more and I now have a goal of breaking 90 minutes.  I would love to do the Red Lake event again and potentially another one sooner.  You just might find me swimming away from big pike off the Parker dock in preparation for the next one.

Side note: There has been some heated debate as to what Carrie’s time was when she competed in 2012.  The results are currently unavailable online and she claims it must have been right around 1:38, 1:38 low.  She’s just certain.  Hmmmm.  We will get to the bottom of this.